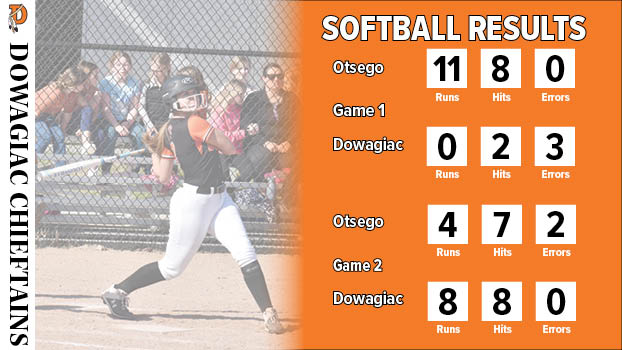 DOWAGIAC — After dropping the opening game of its non-divisional Wolverine Conference doubleheader to visiting Otsego 11-0, veteran Dowagiac Coach Mike Behnke told his team to put that behind them.

After struggling out of the gate in the second game, the Chieftains got their footing and rallied with a five-run sixth inning to win 8-4 and earn a split Thursday afternoon.

“We didn’t play well in the first game and I told the girls after that game doesn’t matter anymore,” he said. “It only matters what you do the next game. It took a couple of innings, but the girls finally started playing ball like they know how. Aubrey [Busby] and Sierra [Carpenter] had big hits in the sixth [inning] to put us ahead, and Sarah [Allen] settled down and pitched a great game.”

The Bulldogs (2-1) jumped out to a 3-0 lead after two and a half innings, but Dowagiac rallied to get one of those runs back in the bottom half of the third inning and then, after falling behind 4-1, scored twice in the bottom of the fifth to cut the Otsego lead to 4-3.

The Chieftains (3-1) then unloaded on the Bulldogs in the sixth.

Emma Allen drew a lead-off walk to start the rally. Caleigh Wimberley singled with one out, and Calley Ruff drew a walk to load the bases for Busby, who doubled to drive in all three runners to give the Chieftains a 6-4 lead. Carpenter followed that up with a two-run home run to center field to complete the comeback.

Dowagiac then turned it over to Allen in the circle, who got plenty of help from her defense in the seventh inning.

“Our defense started making plays,” Behnke said. “Caleigh had a diving backhanded stop and ran down a tough pop out in the last inning to seal the win.”

The Chieftains finished the game with eight hits, led by Busby, who was 2-for-4 with a double and three RBIs. Ruff and Carpenter both had two hits. Carpenter also drove in three runs in the contest.

In the opening game, it was all Otsego as the Bulldogs scored two runs in the first and second innings before exploding for seven in the third inning.

Dowagiac was held to just two hits in the contest, both of which were singles.

Carpenter took the loss despite allowing just three earned runs. She struck out four and walked one. The Chieftains committed three errors behind her.

Dowagiac heads right back into action Saturday as it hosts its annual Chieftain Invitational. Play begins at 10 a.m.

Here are the opening-round matchups: