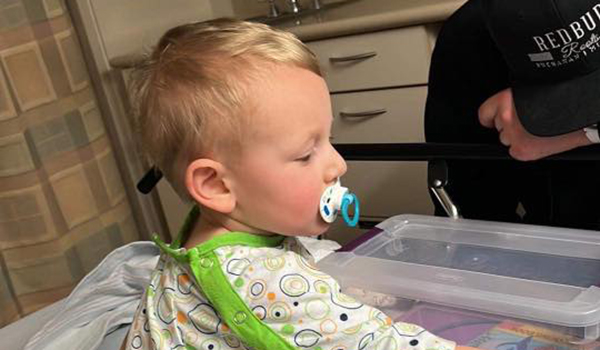 SOUTHWEST MICHIGAN — In a few short weeks, co-ed softball teams from around the area will take to the softball diamond for a cause.

The fee for entry is $150 for a 10-player team, with additional substitutes being $10 per player. Home run bands will be available for $15 per person. The cornhole tournament costs $30 and will take place at 8 p.m. Sunday, May 1.

While the tournament is scheduled for that Saturday, it will be extended into Sunday if the number of teams demand it. The tournament is open to anyone from Berrien and Cass Counties  and the deadline for sign-up is Wednesday, April 20.

Funds raised from the tournament will go toward a down payment for a diabetic alert dog for tournament organizer Gabrielle Beam’ two-year-old son Jaxson, who was recently diagnosed with type 1 diabetes. Diabetic alert dogs are trained to let you know when your blood sugar has spiked too high or dropped too low. According to Beam, DAD training can cost thousands of dollars.

“We thought this was perfect,” Beam said. “He’s young, the dog will grow with him. By the time the dog passes [away], he will be old enough to take care of his diabetes on his own. There have been times in the middle of the night where his glucose dropped so low that he was in a deep sleep. All the dog has to do is smell his breath to be able to tell someone his sugar is too low.”

In addition to the tournaments, the fundraiser will have a bake sale, 50/50 raffle and a silent auction with items including gift baskets, softball equipment for kids, art pieces and more.

According to Beam, the response to the tournament has been positive.

“I’ve had a lot of people say it’s awesome we’re putting something on instead of just asking for money,” she said. “They thought it was a good idea and wanted to support it.”

Beam hopes for a good turnout and that participants have a nice outdoors experience.

“We’re hoping for a good time,” Beam said. “It’s the start of the summer and COVID has taken a lot away. Everyone loves a good softball game and with the silent auction, people love bidding on things and taking them home.”