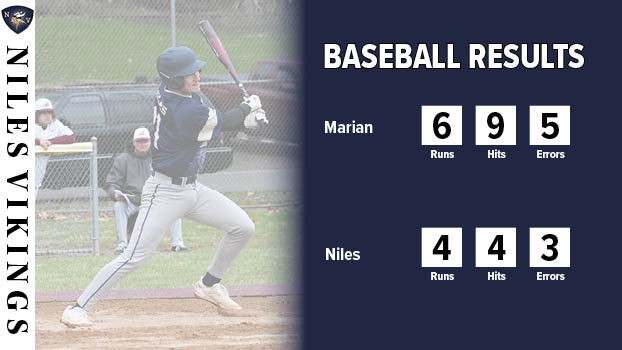 NILES — A five-run third inning was enough for visiting Mishawaka Marian in its 6-4 non-conference win over the Niles baseball team Monday.

Trailing 1-0, Marian scored five runs on a run-scoring double by Bryce Lasane and a two-run single by Mike Compton. The two other Marian runs scored on a Vikings’ error.

Niles (0-2) scored its first two runs on errors by Mishawaka. In the fifth, Austin Bradley singled to score Gage Vota, who had walked, to cut the Marian lead to 6-3. The Vikings also scored a run in the sixth as Bradley scored on a passed ball.

Paddy Keefer picked up the win for Mishawaka as he allowed two runs on one hit in three innings of work.

Offensively for Niles, Gonzalez and Sam Rucker both doubled.