Buchanan suffers first loss as it splits with Watervliet 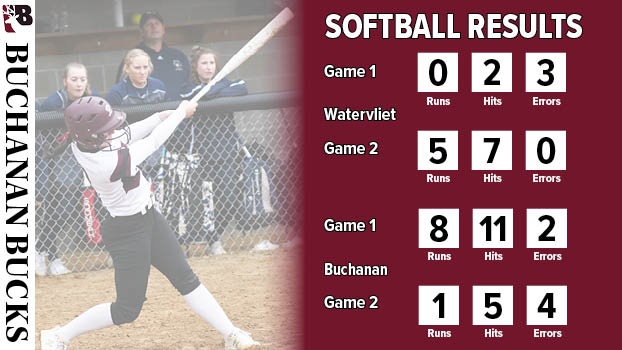 BUCHANAN — Camille Lozmack tossed a two-hitter with six strikeouts and no walks as host Buchanan split a non-league softball doubleheader with Watervliet Monday.

The Bucks (5-1) took the opening game 8-0 behind the pitching of Lozmack and a 3-for-4 performance at the plate by Hannah Tompkins, which included a pair of RBIs.

The Panthers (1-1) rallied to win the nightcap 5-1 as they used a three-run fifth inning to seal the victory.

Buchanan finished with eight hits in the first game as Hannah Herman and Kamille Lemon both had a pair and drove in two runs. Sara Faulkner added a double.

In the nightcap, Hannah Hart scattered five hits for Watervliet to earn the victory.

The Bucks return to action Wednesday as they are scheduled to host Centreville in another non-league doubleheader.