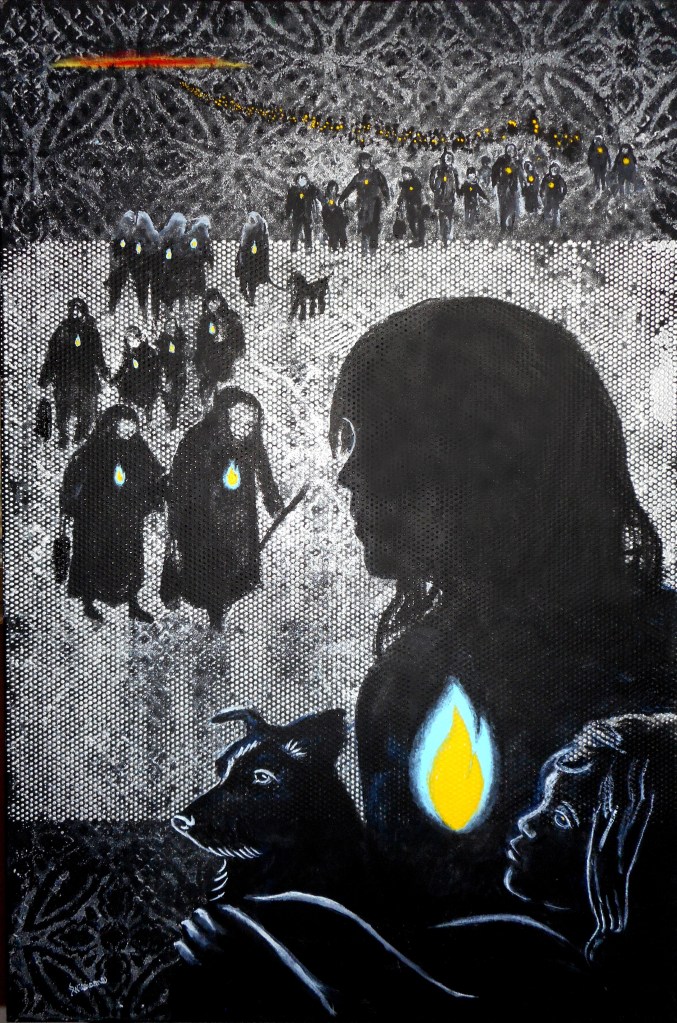 NILES — The conflict unfolding in Ukraine has inspired a Niles native to take up arms with her paintbrush and canvas.

According to the Office of the United Nations High Commissioner for Human Rights, more than 1,600 civilians have been killed and more than 2,200 injured since Russia first invaded Ukraine in late February.

“We’ve all been watching the horrors on TV and the one image that stuck out to me was the women and their children trying to get to safety somehow,” she said.

The painting was a collaboration between Williams and fellow Niles artist Jeff Matejovsky, whose canvas was used in the piece. Williams then added the figures of the women as well as the flame in the colors of the Ukrainian flag. As the figures get smaller, the flame turns into just a flash of yellow like so many fireflies in the night.

“[The canvas] had an industrial look to it with the silver mesh on it,” Williams said. “I painted my figures over it. I wanted the figure in front to be sharp focused and as the figures receded, they get more abstract. Toward the back, pretty much all you see are yellow lights that look like fireflies from the flames.”

While she has no plans to submit the piece in contests, Williams said the NAA has plans to have exhibits at the Niles District Library and the Buchanan Art Center this year, where she may bring the piece to be showcased.

“Hopefully I will be able to put it there,” she said. “I would like people to see it but there are limited venues around here.”

Williams said the response to her painting has been positive.

“I think people are glad to see the bit of hope I painted there,” she said. “Everyone is sad that this is happening but I do think it’s something that I think had to be said. I’m not an activist but when it came to this I just felt I had to create a statement.”