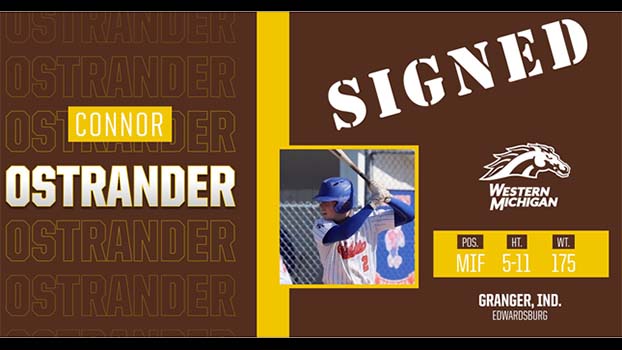 Ostrander, a four-year starter for the Eddies, joins Buchanan’s Matthew Hoover on the roster of the Broncos.

The Edwardsburg senior said he liked everything about Western Michigan.

“Western kind of felt like home,” Ostrander said. “The coaches there really loved me. They like me as a player and a person. The comfort there just felt right.”

Last season, Ostrander hit .533 with 16 doubles, four home runs and 40 RBIs, which earned him a spot on the Michigan High School Baseball Coaches Association’s Dream Team. He was also first-team Division 2 All-State, All-Region and All-District to go along with his first-team All-Wolverine Conference honor.

Ostrander is a three-year starter on the Edwardsburg football team. He earned All-Wolverine Conference honors at linebacker this past season and was an honorable mention selection as a sophomore.

“Multi-sport athletes are a commodity and Connor has played and succeeded in many sports,” said Western Michigan Coach Billy Gernon. “He’s been an outstanding football player in high school and has been an impact bat in the Edwardsburg lineup since his freshman year. We like the pop and potential of his left-handed bat and his athleticism is on display every time he steps on the field. When he commits to just one sport on a year-round basis, his game will most certainly go to another level.”

Ostrander said he had not had any official offers but talked to several different schools like Lake Michigan College and Kellogg Community College. He also had conversations with Duke and Bucknell.

“But none of those worked out like Western did for me,” he said.

Ostrander, who plans to attend the Haworth College of Business at WMU, is the son of Brad and Leslie Ostrander.