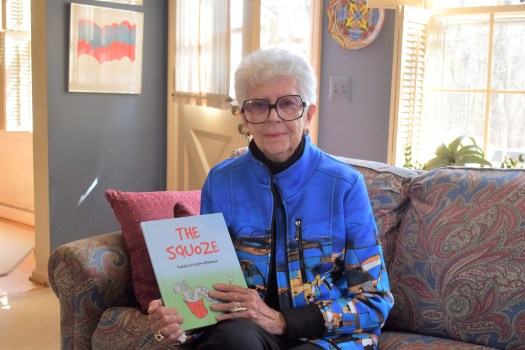 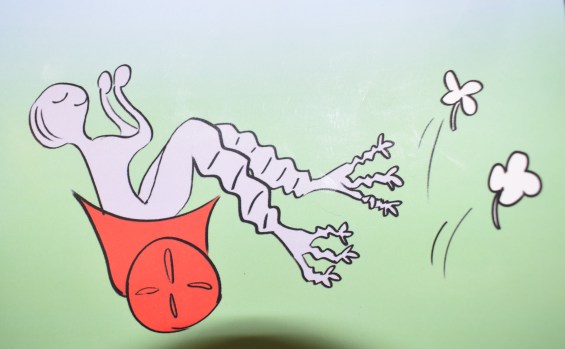 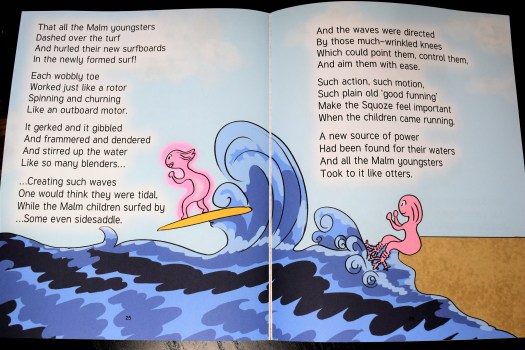 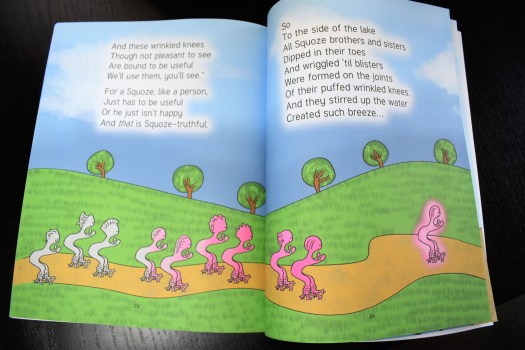 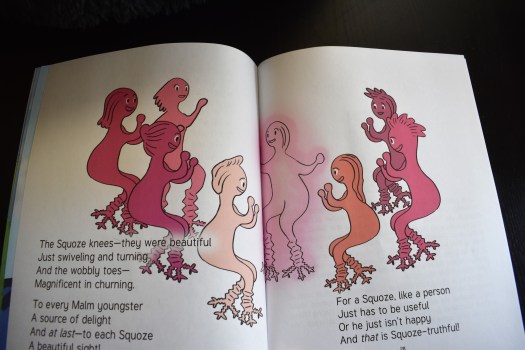 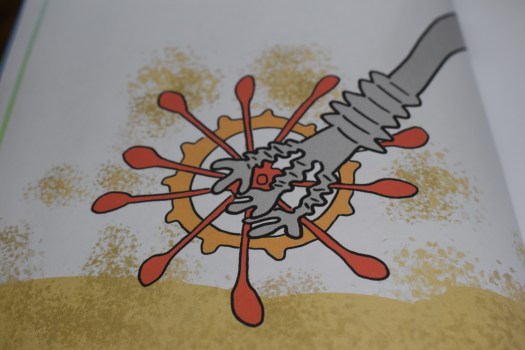 DOWAGIAC — As a child growing up in the 1930s and ’40s, Thelda Mathews was taught to value the English language.

“Every semester, one was required to take an English course of some sort – whether it be grammar or literature or whatever – but always English, and always spoken correctly,” said Mathews, who went to school in New Albany, Ind. “It bothers me when I hear it used incorrectly. For example, if someone orders fresh-squoze orange juice.”

Now, the 91-year-old Dowagiac resident is passing on her love of language to a new generation with the release of her first children’s book, “Squoze,” published by Covenant Books.

Squoze is a Dr. Seuss-esque rhyming story about a family of Squoze, a mythical creature with rather unique and unattractive gray appendages. To begin the story, Mathews describes the Squoze in great detail – along with an English lesson:

“Now the past tense of squeeze / just cannot be Squoze. / It’s squeezed, of course, / As everyone knows. / But these little creatures / Look squeezed ‘til they’re Squoze / So they have the right name now / Don’t you suppose? / Their knees are so wrinkled / Then pleated again / That no one can tell / just where they begin. / Their ties are so wobbly / And jointed quite triply, / One wouldn’t believe it / unless sworn to by Ripley.”

In the story, Little Squiz Squoze is appointed the task of figuring out the purpose of the Squoze legs and toes. At first, he feels shame for his ugly appendages, and considers covering them up with argyle socks. As he tried to come up with inventive ways to use his “rotary toes,” Squiz grows increasingly frustrated – but never gives up.

Eventually, he comes across the Village of Malm, where “everyone, everything is unbearably calm,” where he figures out a way for his Squoze toes to be useful – using them as a propeller in a lake to create waves for surfing:

“Such action, such motion / such plain old ‘good funning’ / Make the Squoze feel important / when the children came running.”

As the Squoze begin to feel more useful and happier, they start to glow pink. Ultimately, the lessons for children to learn are scattered throughout the story, told in Mathews’ whimsical and nonsensical style:

“For every Squoze knows / in his little Squoze heart / if you’re looking for something / you must make a start. / You must try with the best/to do something useful. / And your dreams will come true, and that is Squoze-truthful. A Squoze wants to be helpful / to all that he can / That makes a Squoze happy / the same as for man.”

Sitting on the story

After graduating from Indiana State University, Mathews taught sixth grade in Dowagiac for four years, “retiring” to raise her two sons, Scott and David. Around 1980, after her children graduated high school, Mathews began writing the first portion of “Squoze,” but put it on the back burner as she pursued additional college education and a 25-year career working with sculptors at K&M Machine Fabricating.

“I sat on [Squoze] for many years before I got it out and started looking at it again,” Mathews said. “I put the manuscript in the storage compartment of my piano bench, so I really sat on it for a long time.”

Mathews said the story was written for her seven grandchildren and includes a dedication to them in the book.

“Of course, they loved it because they love their grammy,” said Mathews, adding they love to tease her when she corrects their grammar. “I don’t let them get away with using a preposition at the end of a sentence. So, they’ll often say to me ‘grammy, where is it at?’ just to make me cringe.”

In college, Mathews said she had written a rhyming skit for the campus review, and enjoyed writing song parodies of popular songs while she was in high school. Now, when special occasions such as birthdays and other notable events come around for friends and family, Mathews said she continues to write poems.

“Whether they want it or not,” she said, laughing. “Writing verses just comes naturally, and I have no problem with making words rhyme. … I’ve always written what my family called nonsense.”

“It was hilarious,” she said. “One little boy, I explained to him what a Squoze was … that it wasn’t real and so forth, and he said ‘I have a hundred of them in my backyard.’ His teacher commented what an imagination he had.

“And it was interesting that so many of the little children – first, second and third grades, I think – they wanted to touch me because they had never known anyone who really wrote a book, and they were really impressed. I got lots of hugs and it was beautiful, it took me back to the classroom and my sixth-grade students.”

“Squoze” is available for purchase online through Amazon and Barnes and Noble.