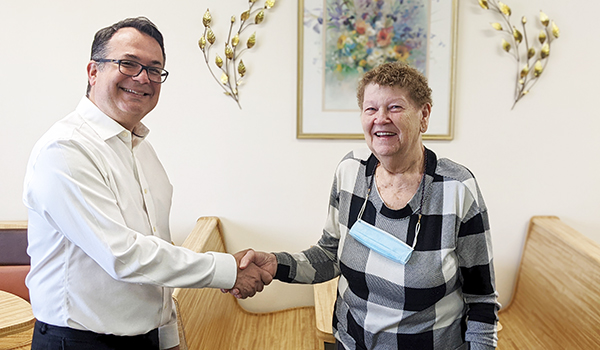 NILES — A long-time Niles restaurant has closed its doors.

Duncan’s Kozy Kitchen, 1100 Front St., served its last meals Thursday morning, ending 28 years of service at the location. The restaurant, founded by Mary Duncan and her late husband Kenneth in 1991, was originally located across the street from its current location before relocating in 1994.

Restaurant supplies including kitchen equipment, seating booths and tables will be sold.

“We’ve made a lot of memories in this place,” Duncan said. “We’ve had the nicest people here. Everyone’s like family. They’ve always been great to us.”

Duncan sold the building to Alex Markovich, owner of Niles-based Life in Balance Physical Therapy, who plans to relocate his clinic to the space.

“I am at an exciting juncture in my life,” Markovich said. “I’ve been serving the Niles population and some other surrounding areas as well and I just love it. I love physical therapy and I love having the ability to structure a business in the way that I like to serve.”

Duncan has been a part of the restaurant business for most of her 78 years. She was 15 years old when she took her first job in a restaurant.

“I’ve worked in factories and I’ve worked in retail,” she said. “I don’t know how but I always just went back to restaurants. That’s been my life and I enjoy it.”

“The customers here, they all become really good friends,” he said. “I come here practically every day. It’s gonna be tough tomorrow. I’m gonna want to get up and come down here to eat.”

While Brown and the DKK regulars can find another restaurant, he believes it will not be the same.

“There are nice restaurants, don’t get me wrong, but this was different,” he said. “Everyone here was like family, they got to know you. That’s really gonna be hard, but I’m lucky enough that I can go visit them at their house.”

Customers like Brown have been with Duncan during her highest of highs and lowest of lows. Her husband Kenneth passed away in 2020 and Duncan herself is a four-time cancer survivor, having only missed one day of work during treatments.

According to Duncan, after chemotherapy resulted in the loss of her hair, a group of regular customers offered to shave their heads for her.

“I said no, that’s not necessary,” she said. “I’m a strong enough person that I can handle it. They really encouraged me and helped me through. I’m gonna really miss it and I’m gonna miss the people.”

While her time with DKK is over, Duncan has no plans to retire. She has been offered several jobs in recent weeks and is currently weighing her options. In the meantime, she said she hopes to meet with her regular customers once a month for breakfast.

“I can’t say I haven’t enjoyed this,” she said. “It’s been a good experience.”

Life in Balance has been a part of the Niles community since Markovich opened his business in 2000. The son of Yugoslavian immigrants, Markovich and his entire family moved from New York to Berrien Springs in 1992 to transfer to Andrews University and pursue physical therapy. Markovich said he began looking at relocation options recently before learning that Duncan’s building contract was expiring and was willing to sell. For Markovich, a space like Duncan’s with a warm atmosphere baked into its walls was the perfect place to relocate his physical therapy business.

“I have been looking on and off for years,” he said. “Initially it just was not the right time to buy but a few months later, it was totally the right time. We were able to come to a mutually beneficial arrangement between the seller and me, which I feel very good about. I feel that she’s worked hard; she and her husband did a big thing here and so I hope that she’s gonna be moving forward feeling a sense of success in what she’s accomplished. I’m moving forward and hope to take some of her spirit into my organization as well.”

Markovich both understands and respects what DKK meant to the community. While his business will not be serving up food and coffee to customers, Markovich looks forward to carrying on the DKK legacy in his way.

“We can build on that because it’s a privilege to take over this building,” he said. “I’m excited because I feel that there’s something special about the vibe here; it’s got that homey feeling and it’s because of her and her husband. That’s what I want for my patients and when they come into my office, I want them to feel at home and this provides that.”