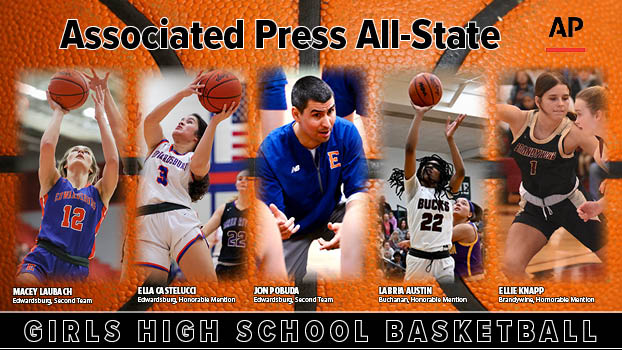 EDWARDSBURG — Macey Laubach, a senior at Edwardsburg High School, was one of four players to receive all-state honors from the Associated Press this week.

Laubach, who helped lead the Eddies to a 20-0 regular-season record, a district and regional championship, and a spot in the Division 2 state quarterfinals, was a second-team selection by the AP.

“Anytime you can be recognized across the state amongst your peers is an honor for both players and coaches,” Pobuda said. “I am very grateful two of our players have received this honor and it validates our historic season and their incredible play. I’m so proud of Macey and Ella and our entire program from top to bottom. I couldn’t have asked for a more meaningful and accomplishing season. This has been a great group from start to finish.”

Knapp was southwest Michigan’s leading scorer for the 2021 season as she averaged 17.9 points per game. The Bobcats’ point guard also averaged 3.7 assists and 4.9 steals while only committing 20 turnovers in 21 games.

“What you get in Elle Knapp is she grew up in a basketball family,” said Brandywine Coach Josh Hood. “Ellie grew up playing with her brothers and playing with the boys. She really evolved this year. She had a lot more confidence with her game. She did a lot of great things as a freshman, but this year she really took her game to a whole new level.”

Austin averaged 12.2 points per game with 4.2 rebounds, 2.8 assists and 2.3 steals in helping the Bucks earn a share of the Red Division championship and a Division 3 District title.

“LaBria is a natural, and has a great feel for the game,” said Buchanan Coach Gabe Miller. “ Her ability to see the court and create shots for her teammates and herself made her instrumental to our team’s success this season repeating as conference and district champions.”