Construction of roundabout near Indiana border slated for summer 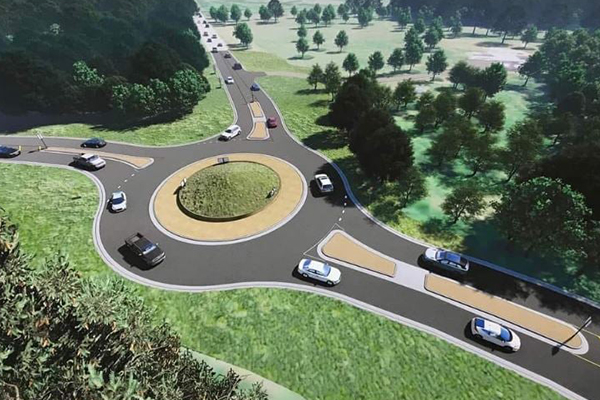 A rendering of the proposed roundabout. (Image provided)

MILTON TWP. — An intersection long-known for dangerous turns and high traffic will soon be safer for local drivers.

The Cass County Road Commission announced this week that construction of a roundabout at the eastern intersection of Redfield Street and Gumwood Road is slated to begin this summer after years of planning.

The intersection is often traveled by Indiana and Michigan residents alike, and those traveling northbound on Gumwood Road often face traffic delays due to the 45-degree angle the road approaches Redfield Street. According to a 2017 Niles-Buchanan-Cass Area Transportation Study by the Southwest Michigan Planning Commission, Gumwood Road averages over 7,500 vehicles per day between the Indiana state line and Redfield Street.

According to Cass County Road Commission Chief Engineer Joseph Bellina, the county and Milton Township collaborated on a study of the intersection in 2014, and concluded the intersection needed to be addressed.

“You have to look over your shoulder to see traffic,” Bellina said. “That corridor being as busy as it is, people get delayed and they get anxious and they pull out into traffic when they probably shouldn’t.”

Bellina said Cass County and Milton Township looked at about seven or eight solutions to the traffic problem, and ultimately decided a roundabout was the best solution.

“Roundabouts move traffic more efficiently than a standard intersection,” he said. “Instead of T-bone accidents or crashes of a serious nature, you have crashes that are much less endangering – rear-end accidents and sideswipes in the same direction – things that are less harmful to the driver of the vehicle.”

“[The township] has been a fantastic partner,” Bellina said. “This project has been a long time in the making. Even after the study was done, we applied for the safety funds from the state of Michigan three consecutive years before we were selected as a project. I think the road commission and the township have been tenacious in making sure the project moves ahead for the safety of the residents and citizens of the county.”

Prior to the bid for construction being awarded by the state, Bellina said there is still utility work that needs to be done in the area, adding the county hopes to begin work by August.