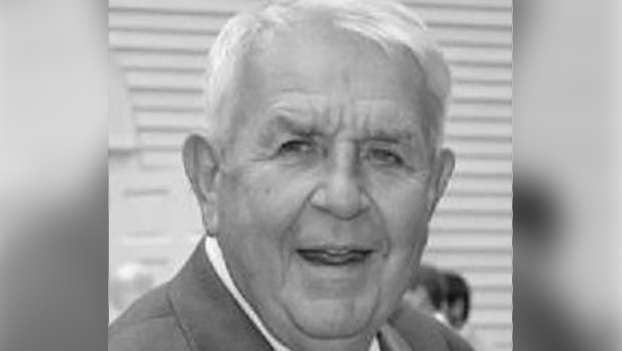 John was born on July 8, 1933, to parents Chris and Helen Schrader in South Bend. After John graduated from Washington Clay High School (South Bend) in 1951, he was drafted into the Navy and served between the Korean War and the Vietnam War. After leaving the Navy he followed in his father’s footsteps and began working as a tool and die maker. After a family vacation out west, he returned and started his own business, Schrader Wood Stoves in 1977, which later became Schrader Steel Fabricating in Niles; his lifelong employment.

On April 4th, 1959, John married the love of his life Beverly Jean Fisher in New Carlisle, IN. John and Bev were married just shy of 63 years. They went on to have four children, Karen, Chris, John and Sheryl.

Their married life began in South Bend and eventually they raised their family on Barron Lake in Niles, with their dog Mukluk. John loved everything about the lake. If he wasn’t out fishing, you would find him pulling his children water skiing behind his speedboat. Neighborhood hog roasts hosted at the Schrader house were the highlight of the summer along with many fish fries with Bev’s twin sister Barbara Stickler’s family. Once all the children graduated John and Bev built their retirement home on Brookwood Golf Course in Buchanan where he lived until the last year of his life.

John was a devoted family man, there was nothing more important to him than his family. In addition to his four children, he had eight grandchildren and eight (plus one on the way) great grandchildren.

John adored his children, grandchildren and great grandchildren. He and Bev were a fixture at their children’s school events and sporting events. Once the grandchildren started playing sports you would find them at the hockey rink, golf course, Howard Little League and down at NBGSA, where John also coached with his son Chris. He also made road trips with Bev to GVSU to watch Stephanee play college softball, and to Ancilla and Virginia Union University to watch Demi play volleyball and softball.

He loved having a full house and hosting large gatherings to be with his family. Whether it was

birthdays, holidays, the famous Christmas Eve celebrations or just a family cookout, he enjoyed being surrounded by his family.

As a devoted husband of almost 63 years, John took exceptional care of his loving wife Beverly for as long as he was physically able to do so shortly before he passed. John and Bev wintered in Florida for 20 years and enjoyed golfing and socializing with their friends. He regularly took his children and their grandchildren to Disney World and surrounding theme parks. He especially enjoyed riding roller coasters.

John’s hobbies included golfing, bowling and spending time with friends. He and Bev would travel with their couples friends groups to golfing destinations for many years. As a member of the Buchanan Moose Lodge, he enjoyed going to the Moose State Bowling tournaments and playing in the Moose Golf League at Brookwood Golf Course. He also volunteered for many years at the Brian Parker Memorial golf tournament and the Patriot Golf Outing.

According to John’s wishes he will be cremated per arrangements made with Hoven Funeral Home in Buchanan. The family will be having a private celebration of John’s life on April 3rd.