Tin Shop Theatre to open season with ‘The Jailhouse Frocks’ 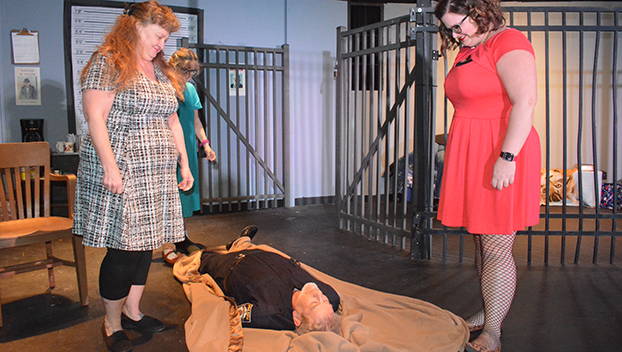 BUCHANAN — The Tin Shop Theatre is gearing up for its next production, one in which it hopes the audience will have a “jail” of a good time with.

The historic theater, located at 108 E. Roe St., will be performing “The Jailhouse Frocks,” a play by Devon Williams.

Directed by Alice Kring and starring Craig Sumerix, Patricia Baltazar, April Jonatzke, Julie Blaylock and Evan Kring, the comedy centers around the shenanigans that unfold one night at the Birchwood County police station when dimwitted officer Dwayne Pope is tasked with overseeing the jail following the arrests of three unlikely women: the mayor’s wife, the local mad cat lady and a dangerous looking New Yorker. Making matters worse, an infamous New York gangster arrives in town hell-bent on exacting revenge on his wife.

Alice Kring has both appeared in and directed several plays at the Tin Shop Theatre. For Kring and the cast, working with a small group of cast members has been a nice change of pace from previous shows.

“This is the smallest cast I’ve been a part of other than a one-person show I did,” she said. “I like it because it’s more intimate; we’ve all been in a lot of shows together. It’s just been nice having a small show to get us back into the theater. Working around everybody’s schedules is hard enough. We’re all really busy people, so it’s hard. With a big cast, it makes it more difficult.”

While the small cast has made many aspects of the show easier, it has presented challenges the cast has enjoyed overcoming.

“I think something that we’ve all found challenging is that most of the time, scenes would consist of dialogue between two people,” Baltazar said. “But in this one, you know, it’s bouncing between three or four people so it’s harder to remember where to come in on time. You’re not directly answering a person. You have to wait for two other people. We’ve all tried to embrace that challenge and live up to it.”

Baltazar has acted in more than a dozen shows at the Tin Shop Theatre. Taking on different roles and bringing them to life in front of an audience keeps her coming back to the stage.

“My parents would tell you that I was a natural born ham,” she said. “I was in drama growing up. My mom would say ‘the curtain is rising on Patty.’ I think it’s just plain fun. It’s work, but it’s just so much fun. When you get a good-sized audience and you get some feedback, it’s just a great give and take. I just find it fun.”

Kring and the cast look forward to showing the community what “The Jailhouse Frocks” is all about.

“It’s a humorous, zany story that happens one night in a jail,” Kring said.

“With surprises [the audience] is not going to be expecting,” Sumerix added.