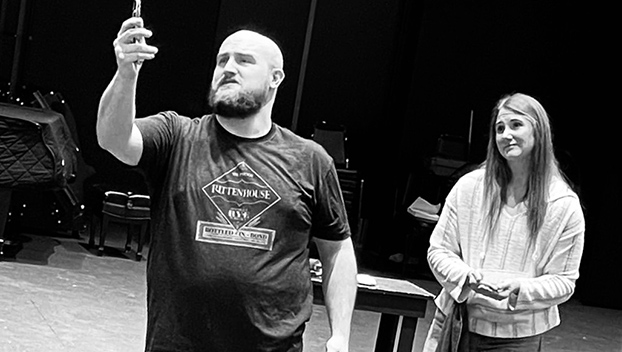 The dark, Tony Award-winner for Best Musical by Stephen Sondheim centers on the title character, whose real name is Benjamin Barker. After being wrongfully sentenced to life in prison by corrupt Judge Turpin, Barker uses his new alias, Sweeney Todd, to resume work in his barbershop above Mrs. Lovett’s struggling pie shop. Swearing vengeance against the judge, he and Lovett plot a plan that leads them down a dangerous path with deadly consequences.

“Sweeney Todd is perhaps the finest of Sondheim’s work if indeed his most complex,” said Paul Pow, LMC theatre coordinator and stage director. “This cast and crew are made up entirely of LMC students, local performers and designers, who have worked tirelessly on top of their already innate talents and abilities to pull off this behemoth of a stage spectacle. It has been a true pleasure and life goal of mine to work on this beautiful musical standard and piece of American musical theater.”

The musical, an adaptation of Christopher Bond’s 1973 play of the same name, features music and lyrics by Sondheim and a book by Hugh Wheeler.

“Sweeney Todd” opened on Broadway in 1979 and the West End in 1980. It won the Tony Award for Best Musical and Olivier Award for Best New Musical. It has since had numerous revivals as well as a film adaptation.

They will perform memorable numbers such as “Pretty Women,” A Little Priest,” “Worst Pies in London,” “Pirelli’s Miracle Elixir,” “Green Finch and Linnet Bird,” “Johanna,” “Not While I’m Around” and more!

“Sondheim has truly captured a thrilling time for both the performers and audience,” Lopez said. “I find something new in the score each time I read it.”

Tickets are $18, $12 for senior citizens, and free for all students, LMC faculty and staff. The musical may not be suitable for younger audiences.

“Sweeney Todd” is presented through special arrangement with Music Theatre International. All authorized performance materials are also supplied by MTI.