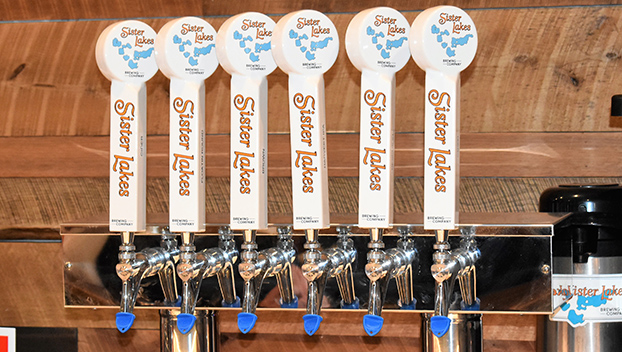 SISTER LAKES — When Pravda Brewery in Lviv, Ukraine opened their recipe books and called on brewers around the world to raise awareness and funds for the humanitarian crisis in Ukraine, one local brewery answered the call.

Sister Lakes Brewing Company is set to release its version of a Ukrainian Imperial Stout on Friday, April 1, with a release party and fundraiser in the brewery taproom. Partial proceeds from the beer sales and event will be donated to humanitarian relief efforts by the Red Cross in Ukraine.

“The brewing community is a very tight-knit community, the kind of community where I can call a brewery anywhere around here and say, ‘Hey, I’m out of this ingredient, can you help me out?’ and we all help each other out.” said Sister Lakes Brewing Company co-owner and brewer Brian Morin. “It also happens internationally. So, when another brewer basically went out there and said, ‘Look, we need your help,’ we decided that anything we can do, we’re going to do.”

On Feb. 24, Pravda Brewery stopped brewing beer and started making Molotov cocktails in an effort to win the war against invading Russia.

“Brewing in Lviv now sounds like a non-priority,” said Pradva Brewery, on its website. “The city is bracing for a fight. Alcohol is forbidden, and we, once in a lifetime, support it. But brewing now – like giving birth or a marriage – is hope. Beer takes several weeks to be ready. We hope we win by then.”

Pravda Brewery released several recipes and official labels to any brewer around the world who wishes to brew their beer, even offering online brewing sessions.

“As peaceful craft brewers, we want to return to the normal life ASAP and enjoy brewing and drinking,” the Ukrainian brewery said. “But first we must kick the cockroaches out of our land. No more Gulags, Holodomors and oppression. It’s a decisive moment for Ukraine, Europe and democracies of the world. Soon we will win this war and have a good beer. The Beer of Victory.”

Morin said the Ukrainian Imperial Stout is brewed with roasted beets, and for the April 1 release party, the brewery’s chef will be creating some Ukrainian dishes for attendees.

“We’re doing an all-call for the community to come out,” Morin said. “Show your support, and we’ll make as much money as we can to send over there.”