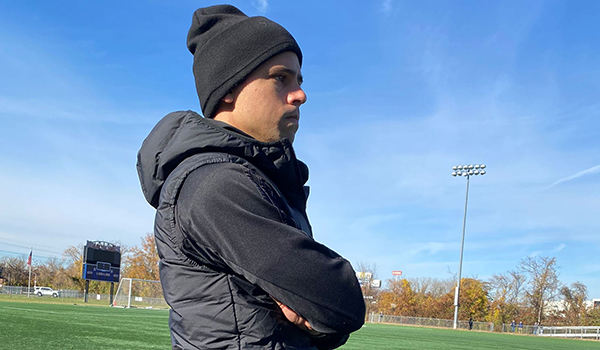 NILES — The blue and gold color combination has been missing from Michael Tanke’s wardrobe ever since he graduated from Niles High School in 2007.

Now, 15 years later, the former boys soccer standout’s new job has him rocking the blue and gold once more, albeit 454 miles away in Buffalo, New York.

Tanke inherits a Golden Griffin program that finished with a 1-14 record last season, including a 1-9 record in the Metro Atlantic Athletic Conference.

“If we can improve every single day, game and year, I don’t know where we can go but I know we can get better,” he said. “We have to get better with everything we do. If we focus on the process, I know we will be better than we have been.”

Tanke played professionally in the United Soccer League Professional Division for three years before injuries cut short his career. He began his coaching career as a graduate assistant at Castleton University in Castleton, Vermont – where he earned his master’s in education, – before joining the University of Dayton Flyers men’s soccer program in 2015. After two seasons in Dayton, Ohio, Tanke was named an assistant coach for the University at Buffalo men’s soccer team in 2017 shortly before the soccer program was cut. He has spent the past five seasons overseeing the Empire United MLS Next development program in Rochester, New York before being named head coach at Canisius six weeks ago.

“There is a big difference in responsibility,” he said. “The final decisions fall on your shoulders. You’re doing the same work but I’m no longer making suggestions for decisions. My attitude has been to be a head coach, work like an assistant coach and keep my same habits as before.”

For Tanke, not only is the position an opportunity to prove himself at the Division 1 head coaching level, it also allows his family to stay close to home.

“That was always our goal career-wise, to stay in western New York,” he said. “This opportunity came along and it meant that we would be staying in western New York for the long term. This area is home to me now, so it’s a perfect fit for my personal life.”

While he may be new to the role, Tanke knows exactly what he wants his Canisius program to be.

“We’re going to be team-first,” he said. “We want the whole to be greater than the sum of its parts. It’s only been six weeks but our motto is ‘be a great teammate and defend like hell’. The better people we are, the more likely we are to win soccer games.

Tanke sees aspects of Canisius’ program that remind him of his days scoring goals for Niles.

“Canisius and Niles are similar in that we’re underdogs in some respects,” he said. “In boys soccer back then, we were underdogs at Niles and that’s the mentality at Canisius, too. We’re trying to punch above our weight class. I’ve been doing that since I was a freshman in high school. … My time in Niles was really fun because of that. We accomplished a lot as a team that I don’t think many people thought we could, which makes it even more memorable.”

Tanke looks forward to applying the life lessons he learned growing up in Niles to his new head coaching position.

“I don’t think I would be a coach without my upbringing in Niles,” he said. “I feel thankful to have that background. A lot of what I’m doing today probably comes from things I learned at Howard Township baseball or playing basketball in town. I had a lot of good youth coaches in Niles.”