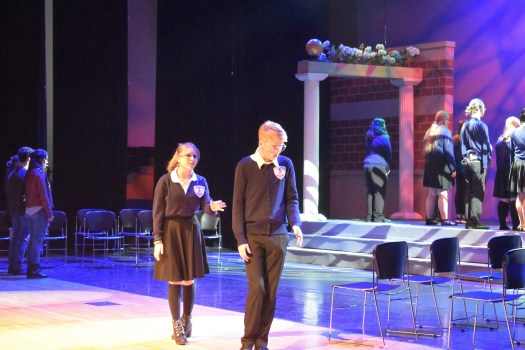 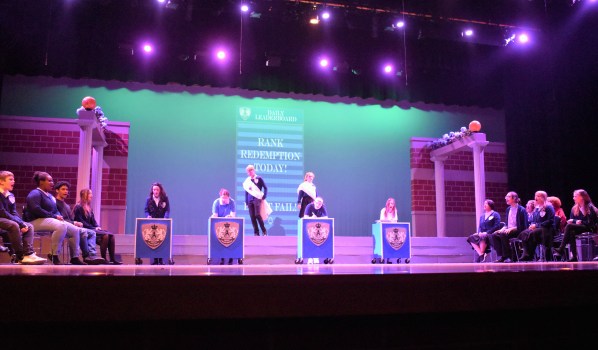 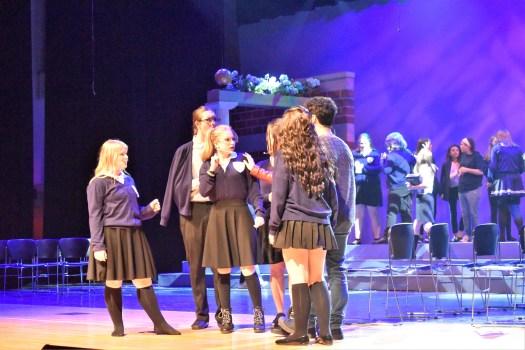 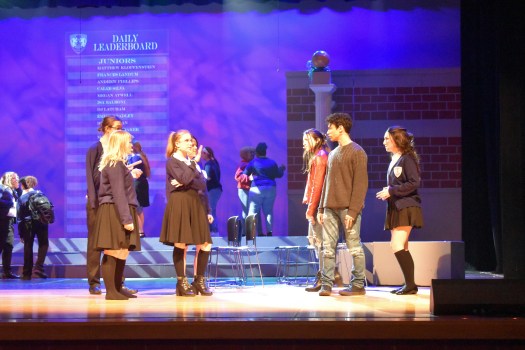 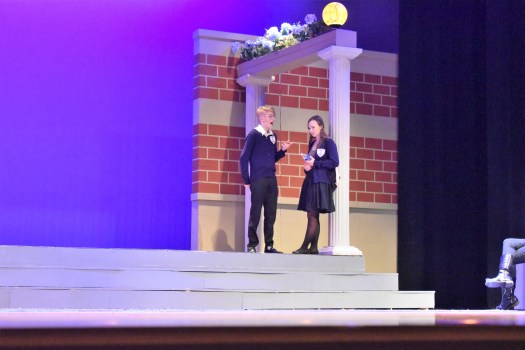 Such is the mindset in the world of the dystopian school musical “Ranked” which is set to be presented by Dowagiac Drama students this Friday, Saturday and Sunday in the Performing Arts Center at Dowagiac Middle School.

“Ranked” is set in a modern school where students are defined by their rank on a competitive academic leaderboard, and students will do whatever it takes to get to the top of the leaderboards. Students who are “above the average” are considered better-than, while “below the average” students are outcasts destined for failure.

“In this world, every part of your future – not just academics – is determined by your test grades and ranking,” said show director and DUHS English teacher Tammy Mammel. “There’s lots of stress and anxiety that teenagers go through to make sure they are ranked really high.”

When rumors start to spread that some students – or their parents – are paying for inflated grades, the entire system gets turned upside down. The play, which debuted around the same time as the infamous college tuition bribery scandal story broke in 2019, was written by two high school teachers whose students expressed their feelings of school-related stress.

“The kids are just really relating to all of the characters in the show and all of the situations of the show,” Mammel said. “It’s stuff they’re dealing with, you know?”

Dowagiac Choir Teacher Hunter Schuur is the musical director of the show, and said the students are also relating to the pop-rock soundtrack of “Ranked.”

“The songs are in my head all the time, because it sounds like something you’d hear on the radio,” said Schuur, adding many of the performers are in his choir class. “The music is really fun, but it’s challenging. … The songs are really heartfelt and emotional and connect to the story really well. After Tammy sent me the show and I listened to the music, I was like ‘we’ve got to do this.’ It’s been really fun. I think anyone who comes out is going to love it.”

“The show is real,” she said. “Kids use these words whether we want them to or not, whether we find it appropriate for school or not. If you’re going to bring your little kids, be aware of that. But it’s not worse than anything you would hear on TV.”

Assistant director and DUHS social studies teacher Connor Michael said his favorite line from the play is “How do we know the difference between what people want for us and who we actually are?” Five of the six show leads are seniors at DUHS, and the directors said many are living through similar experiences as the students in the play.

One student in particular Mammel said stood out for her growth as rehearsals progressed was Elizabeth Green, who plays Alexis Larson.

“When she came to audition, she had this beautiful, sweet voice but it was so little,” Mammel said. “Now, there have been days that she is singing a duet with Amelia Jones, who plays Jordan Carter and is just a powerhouse, and Elizabeth matches her. … Two weeks ago, she was up here and I was tearing up going ‘Oh, she’s come so far.”

Mammel added she loves all of the cast and could talk about every one of them for their progression.

“There’s six of them we could talk about that have faced a lot of adversity and a lot of conflicts,” Schuur said. “It’s cool to see it finally coming together.”

Friday and Saturday shows are at 7 p.m., while the Sunday show is at 3 p.m. Tickets can be purchased at dowagiacdrama.ludus.com. Adult tickets cost $10, and student tickets cost $7.