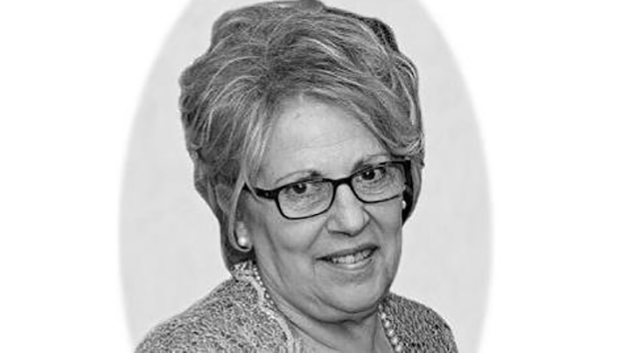 Marcia Martilotti, 78, of Farmington Hills, died Friday evening, March 11, 2022, at University of Michigan Hospital after complications from an aortic dissection.

Marcia was born on April 5, 1943, in Dowagiac, to Gladys and Lee Zelner. She attended Dowagiac High School, graduating with the class of 1961. While in high school, Marcia loved playing saxophone in the marching band and finding time to be a cheerleader. Her senior year of high school she participated in the Miss Dowagiac pageant. After high school, she studied to be a secretary and found the job she loved as a medical secretary at the Upjohn Company in Kalamazoo from 1966-1976.

In May of 1975 she was set up on a date by her sister, where she met her future husband, Tom. They were married on June 25, 1976, in Kalamazoo, Michigan. Marcia and Tom moved to Farmington Hills in the summer of 1977, and Marcia graduated from Western Michigan University that year with a Bachelor of Arts degree in Business Education, including her teaching certificate. Marcia and Tom adopted two children, their son Vincent in 1982, and daughter Theresa in 1986. Marcia was a substitute teacher at Our Lady of Sorrows from 1995 to 2005.

Marica will be remembered as a loyal friend, loving wife, mother, grandmother, sister and aunt. She most enjoyed spending time with family and friends, talking on the phone, laughing and telling stories, and taking care of her many Boxer dogs over the years.

Marcia is survived by her husband of forty-six years, Tom; daughter, Theresa (Hunter) Baum; son, Vincent Martilotti; grandchildren, Dillion, Jasmine, Christian and Thomas; sister Marita (Jerry) Archer; and many nieces and nephews. She was preceded in death by her parents, Lee and Gladys (Fox) Zelner of Dowagiac.

In lieu of flowers, the family requests donations be made to the Michigan Humane Society, or animal rescue charity of your choice.