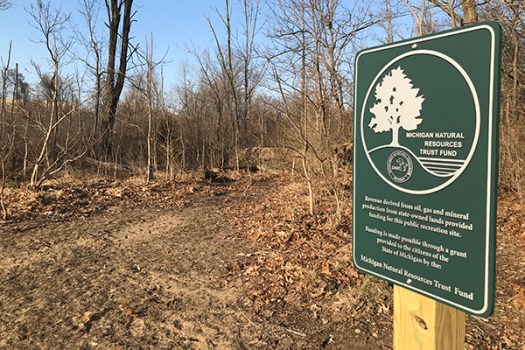 The Dowagiac City Council on Monday approved resolutions authorizing applications for two Michigan Natural Resources Trust Fund grants for the completion of the Elks Trail, which would connect Schuur Park to Riverside Park on the south side of Dowagiac Creek, as well as link to eight additional miles of existing trails. (Ryan Yuenger / Leader Publications) 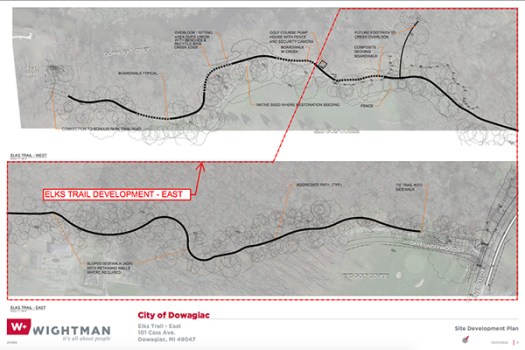 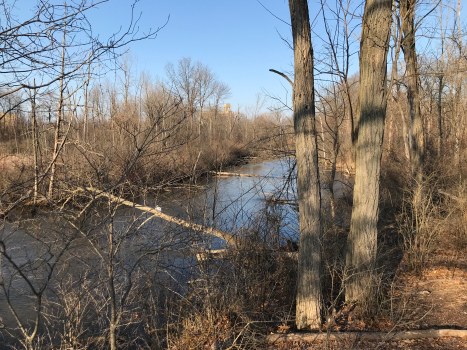 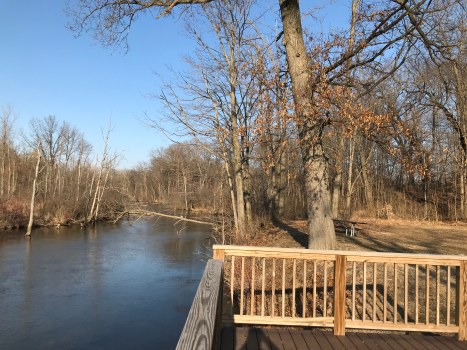 The Dowagiac City Council on Monday approved resolutions authorizing applications for two Michigan Natural Resources Trust Fund grants for the construction of Elks Trail, a long-planned project which would connect Schuur Park to Riverside Park on the south side of Dowagiac Creek, as well as link to eight additional miles of existing trails.

“We’ve been working on these projects for the better part of six years now,” said Dowagiac City Manager Kevin Anderson, adding the city hopes to begin construction by Fall 2022 or Spring 2023. “If we’re able to get it all together, it’s just going to be a terrific walkway connecting two parks along the water. Very excited about that.”

The Michigan Natural Resources Fund provides financial assistance for Michigan communities to maintain and develop recreation facilities using revenue derived from oil, gas and mineral production on state-owned lands. The fund has a limit of $300,000 per application, so Dowagiac is applying for two separate grants, which it hopes will allow the entire trail to be constructed at one time.

The Phase 1 grant would cover the eastern portion of the project, from Riverside Drive to the pump house at Elks Golf Course. The total cost of the Phase 1 project is $356,500, with $92,690 in city funds also approved in the resolution. The Phase 2 project covers the western half of the trail, from Schuur Park to the pump house. Phase 2 cost is estimated at $426,075, with city matching funds totaling $110,780.

Thanks to an earlier grant awarded by the fund, as well as an agreement with the Elks Club, Dowagiac acquired the connecting property through an easement.

According to an engineer’s estimate by Wightman, there will be a combined total of 450 linear feet of boardwalk, as well as benches, signage, trash receptacles, signage, fencing and landscaping along the path.

Anderson Prior to the adoption of the resolutions, one resident spoke in favor of the projects at the public hearing portion of the meeting.

The city also approved a resolution to apply for a DNR Trust Fund grant of $300,000 for the improvement of Laylin Park, formerly Water Tower Park. The resolution also approved the city’s matching funds of $105,490. According to the city, the Laylin Park project will add a walking path circling the park, improved play equipment and improved basketball courts.

“We’re excited about the possibilities,” Anderson said. “[Laylin] park used to have some baseball fields that haven’t been used for a while. It’s got some playground equipment that’s getting a little tired. … So, we’re looking forward to upgrading that.”

In other business, council approved a resolution authorizing the city to apply for a 2025 Bridge Funding Grant to repair five local bridges at an estimated cost of $359,000 plus engineering expenses.

“We don’t have any bridges that are designated as failing,” Anderson said. “But we do have bridges that have been identified that should have some work done on them. … waiting a couple of years for funding will not jeopardize the safety of people traveling.”