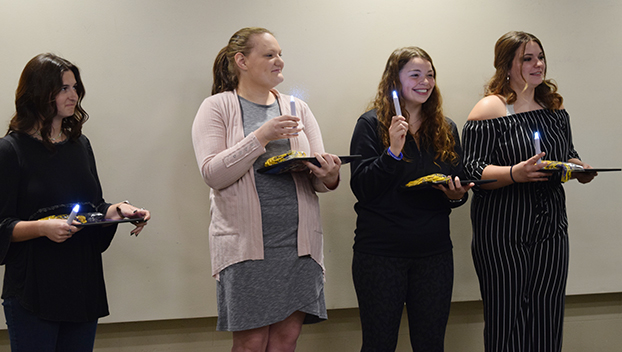 The four new members are Morgan Dwyer of Paw Paw, Brittany Dickson of Edwardsburg, Peytin Lee of Dowagiac and Mya Simmons of Polo, a town of 2,500 in the northwest corner of Illinois.

Dwyer plans to transfer this fall to Western Michigan University or Grand Valley State University to become an organizational psychologist.

“My dream would be to work for Google,” she said. “I finished in the fall, so I’m taking a semester off. I was president last semester. Brittany was secretary, but also became my vice president,” then this semester, president.

With her semester off, “I’ve been working,” Dwyer said. “I just got certified to work with kids with autism on their motor skills.”

Dickson “came here for pre-optometry, then I took a general psychology class, fell in love and couldn’t leave. This is my last semester, then I’m going to IUSB (Indiana University South Bend) for my bachelor’s and, potentially, my master’s. I want to be a school psychologist or a professor. A little part of me wanted to go into early education because I love children, but I can do both in psychology.”

Dickson came to SMC at 21 after taking a break to work and travel.

“I worked on a cruise ship for six months and bounced all over,” Dickson said. “I was on the East Coast, New York, Provincetown (Mass.). I loved it.

“Since I’ve been president, we went to Benton Harbor and distributed water. We’re going to do that again at the end of the semester. We have a fundraiser coming up (April bake sale), with the majority of the funds going to the Michigan chapter of Suicide Prevention because I had a loved one who committed suicide two years ago. The rest will go back into Psi Beta and Psychology Club.”

Lee, Dickson’s vice president, is graduating and plans to attend Western for bachelor’s and master’s degrees to become a school counselor.

“I actually started in early childhood education” before deciding on psychology, Lee said.

Simmons selected SMC because “I didn’t want to go to a university, but I wanted to live on-campus. As I looked around, this was more affordable and has a good psych program, so I toured and came in the fall. I’m passionate about psychology because I want to know why people do stuff. I’ll graduate this fall. I’m getting out early by doing three classes this summer,” plus “I took a bunch of dual-credit courses my senior year of high school. That kickstarted it.”

She put off college for a year after high school. “I have my CNA (certified nursing assistant) so I worked during the pandemic rather than do school from behind a screen. I waited for more in-person classes,” Simmons said.

“Knowledge gained from the study of psychology is applicable to any career. It can be the bridge to solutions for so many challenges we face,” Assistant Professor Christy Tidd, Psi Beta adviser, said. “Psi Beta membership is a well-respected credential for achievement and acknowledges interest in psychology early in one’s educational career. The four of you represent the top 25 percent of all psychology majors at SMC, the crème de la crème.” 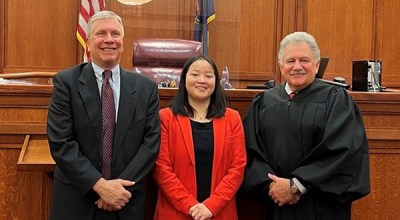 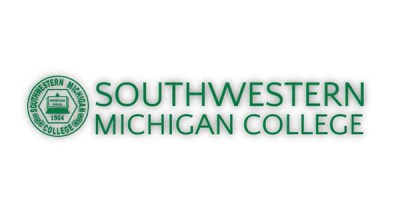 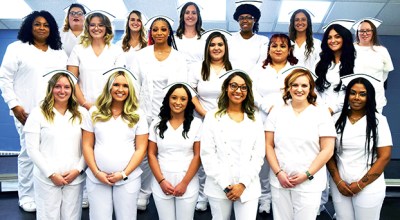 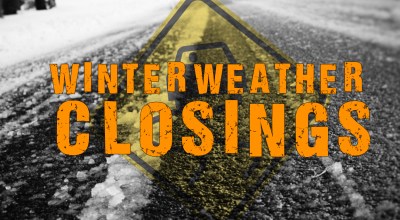