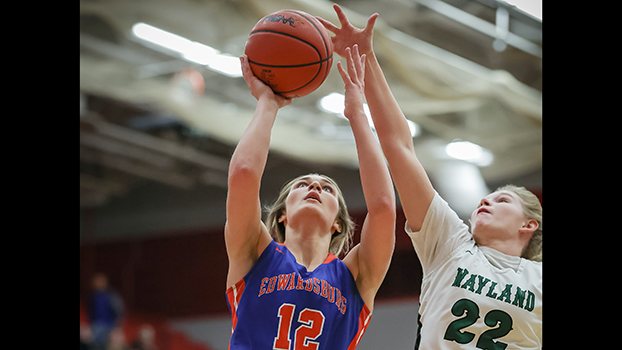 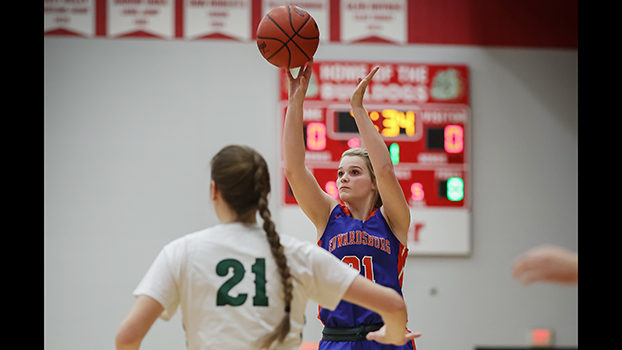 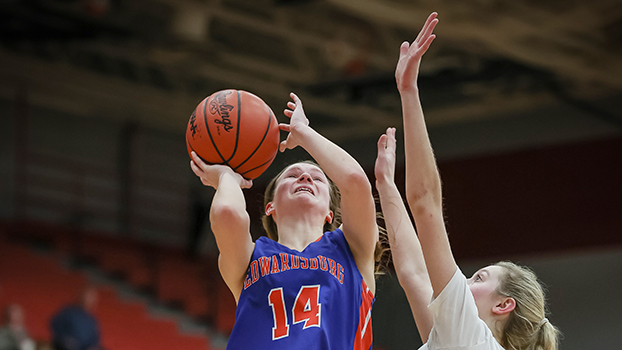 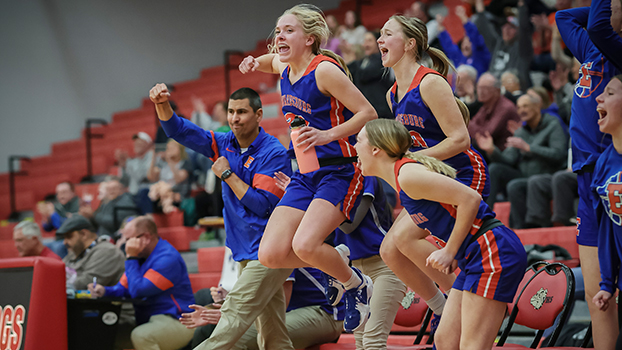 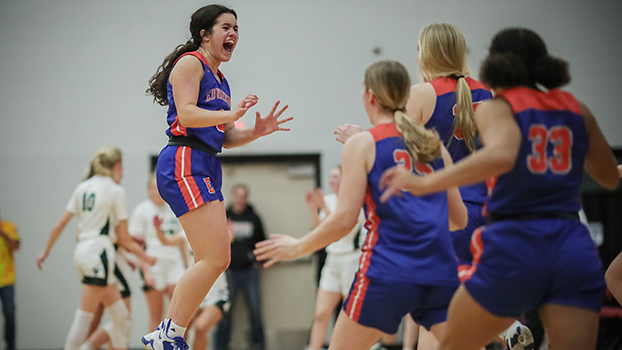 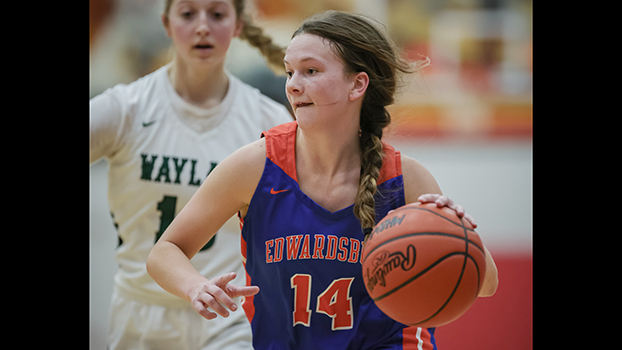 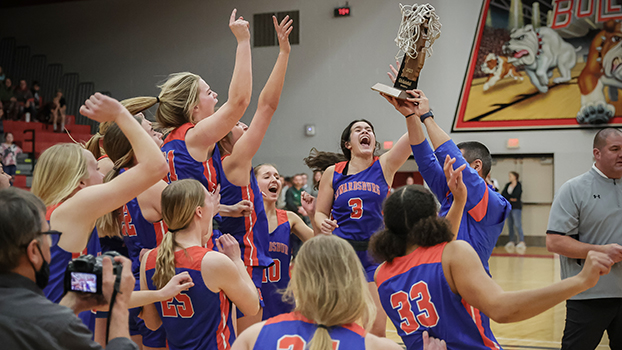 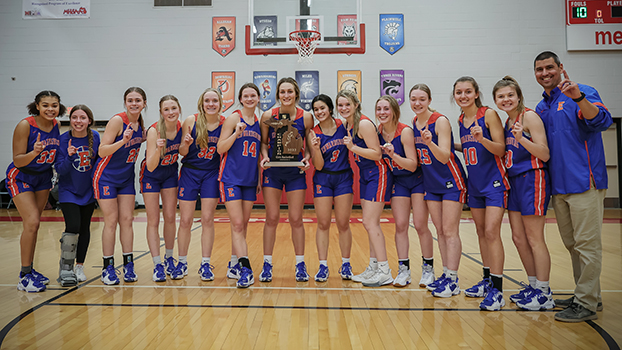 VICKSBURG — They say anything worth having is worth working for.

For seniors Ella Castelucci, Macey Laubach and Katie Schaible, Thursday night’s 59-57 win over Wayland Union in the Division 2 Regional championship game at Vicksburg High School was the culmination of years of hard work.

Wrestling the crown away from the defending regional champion Wildcats was not easy. In a game that was not pretty at times, undefeated Edwardsburg almost let a 20-point third-quarter lead slip away in the final eight minutes.

There were a combined 64 turnovers in the game, including a season-high 30 by the Eddies. The Wayland defense — and the play of Wildcat freshman Harmony Laker — allowed the defending champs to turn a blowout into a wild scramble down the stretch.

“We have to make everything interesting,” said a relieved Edwardsburg Coach Jon Pobuda after the game. “We ran out of time outs. We blew a double-digit lead. But we were able to knock down just enough free throws.”

Those free throws came from his seniors. Castelucci, Laubach and Schaible, who at one point had to leave the game with a calf cramp, stepped up when Edwardsburg needed them the most.

“Ella, Katie and Macey all hit a free throw there to extend our lead,” Pobuda said. “At this point, you just have to be able to survive and advance. We were able to make school history. I am so proud of the girls.”

Pobuda’s three seniors were a combined 10-of-16 at the free throw line. More importantly, they were 9-of-13 in the fourth quarter.

The Eddies’ effort was even more impressive, considering it had not played a close game the entire season. Through its first 23 games, Edwardsburg had won all of them by double figures.

The win advanced the No. 6-ranked Eddies to the Division 2 Quarterfinals, where they will face No. 2-ranked Grand Rapids West Catholic, which improved to 23-1 with its regional championship. The quarterfinal game is set for 7 p.m. Tuesday at Wayland Union High School.

With both teams playing aggressive defense, poor shooting and turnovers where the theme much of the night. Despite the uncharacteristic turnovers and 18-of-61 (30 percent) shooting, Edwardsburg built a 14-point halftime lead.

The Eddies (24-0) led 16-9 after the opening quarter and 29-15. The lead reached 20 points early in the third quarter before Laker became the entire focus of the Wayland offense.

She responded by scoring 25 of her game-high 35 points in the second half. Her 3-pointer from half-court capped a performance that impressed Pobuda.

“I kind of knew she was going to make that shot from half-court,” he said. “I didn’t care. We were up five. But the way she was playing, you just knew it was going to go in. She is just a freshman. She was a beast tonight.”

The Eddies were able to offset her performance with the play of Schaible and junior Averie Markel. Schaible finished with 13 points, including a trio of first-half 3-pointers. Markel scored a team-high 19 points, including 12 in the final 16 minutes, to help Edwardsburg keep the Wildcats at bay. Markel also grabbed a team-high 10 rebounds to go with three assists and three steals. Schaible had five rebounds and three steals, while Castelucci finished with nine rebounds and eight steals.

Schaible’s first-half contribution was big as Laubach, who had carried the Eddies in the first half of their previous two tournament games, struggled a bit offensive. She would finish the night with 10 points.

“I was expecting them to double team me,” Laubach said. “They face-guarded me the whole night. I just had to find my open teammates, who stepped up and got the job done.”

Edwardsburg is not satisfied with just winning the school’s first regional championship. The team, especially the seniors, would like to add more history to their legacies.

“It means the world,” Laubach said. “I know all the work we put in during the offseason, during the year, and the summer. Every Saturday, we are either working on our shooting in the gym, and it finally paid off. I cannot wait for more and to see how far we can go.”

Schaible could not stop smiling following the game as she and her teammates celebrated with family, friends and the Edwardsburg student body.

“It means a lot,” she said. “We have been working hard for this. This was one of our goals for the season. We have been playing together since like the fourth grade. We have a really great connection.”

Not only was winning the championship special to Castelucci, but beating the team that eliminated the Eddies in the regional finals last season, made it even more special.

“I have been playing with these girls since I began playing basketball,” she said. “It means so much that we were able to get to this point and make school history with some of my best friends. It just feels so good. [Beating Wayland] made it so much better. Redemption baby.”

Tickets for Tuesday night’s game are only available online. To purchase tickets, got to gofan.co/app/events/554651?schoolId=MI4239.