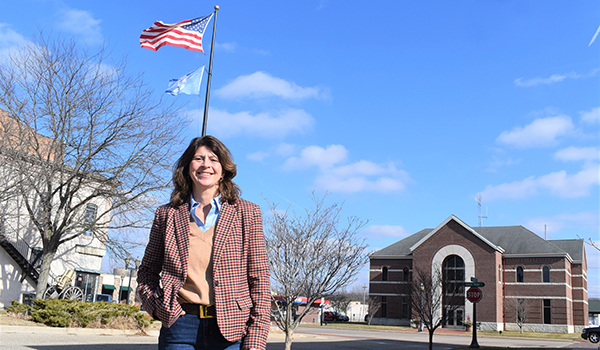 Dowagiac resident Eileen Crouse has long dreamt of the city having its own flag, and now that dream is about to become reality with the city announcing its plan to accept flag design submissions in its 145th year as a city. (Ryan Yuenger / Leader Publications)

DOWAGIAC — When Dowagiac City Council Member Patrick Bakeman was running for the position in 2017, one of his neighbors said she would be happy to support him – but on one condition.

“I told him, ‘If you win, I want a Dowagiac city flag,” said Dowagiac resident and flag enthusiast Eileen Crouse, laughing. Now, after years of dreaming about Dowagiac having its own city flag, her vision is becoming a reality.

The City of Dowagiac announced last week it will have its own flag for the first time in its 145-year history. City officials are accepting design submissions from anyone interested – resident or not – with a submission deadline of April 11 at 5 p.m.

According to the city, the goal is to create an attractive and symbolic design that celebrates Dowagiac’s history, progress and future.

“The design should foster civic pride and make a statement to our residents and visitors,” said the city, in a press release. “Designs will include elements central to Dowagiac’s identity: the Dowagiac River and Creek, the railroad, an ethnically diverse heritage, and the city’s industry and history.”

Since about 2014, the city flag was no more than an idea in Crouse’s mind, but when another local resident and flag enthusiast, Paige Behnke, expressed a similar interest, Crouse brought the idea to Bakeman, and he decided it he would bring it up before the city council.

Bakeman, who chairs the Economic Development Committee for the city, oversees the subcommittee for this particular project, with Crouse and Behnke also members. Crouse said the subcommittee worked with Dowagiac Area History Museum Director Steve Arseneau on researching the history of Dowagiac, as well as what makes a good flag and a bad flag.

“We looked at some great flags like the one for Chicago,” Crouse said. “Being a native Chicagoan, I know how powerful a great flag can be. … We also looked at the city of South Bend, who recently created their city flag, and came up with a beautiful design.”

In the guidelines for submission, the city recommends that entries adhere to the North American Vexillological Association’s principles of flag design, which include keeping the design simple and using meaningful symbolism to relate to important events in Dowagiac history. The designs should be limited to two or three colors – not the Dowagiac School colors – and include no lettering or seals.

“A good flag can be drawn from memory by a child,” Crouse said. “A good flag can be put on a small piece of paper – smaller than a notecard – and still be able to pick out all the important features … you can’t have any small details that will get lost.”

“If everything goes well, we will be debuting the first ever Dowagiac flag in the middle of the year,” Crouse said. “We are so appreciative of Mayor Lyons, city council, City Manager Kevin Anderson, Bobbi Jo [Hartline] and everyone at the city. None of this could have happened without them.”

In addition to being a flag enthusiast, Crouse is also a Dowagiac enthusiast. Since moving to the city from Chicago about 25 years ago, Crouse has worked in various roles at Southwestern Michigan College. Most recently, she was a corporate case manager for Sprenger Health Care Systems in Mishawaka.

After retiring in July, Crouse has been involved with the Dowagiac Chamber of Commerce, currently serving as Membership Development Coordinator.

“I’ve watched this city transform from another struggling Michigan town to this beautiful town,” Crouse said. “Something I’ve also noticed in the time that I’ve been here is there is a lot of pride. Likewise, when I meet people who are new to the community, they are just so doting. … I feel like it’s the type of town that will really like having something like a city flag.”

Crouse said she believes it is important to spread positivity, and for people in the community to be a part of the solution rather than focusing the negative.

“Get out there and make a difference,” she said. “I think it’s important for people to know that every citizen can get involved with something they’re passionate about to improve the city and move it in the direction they want it to go.”

To submit a design to the city, visit cityofdowagiac.com.