Brandywine revives Shakespeare tradition with ‘As You Like It’ 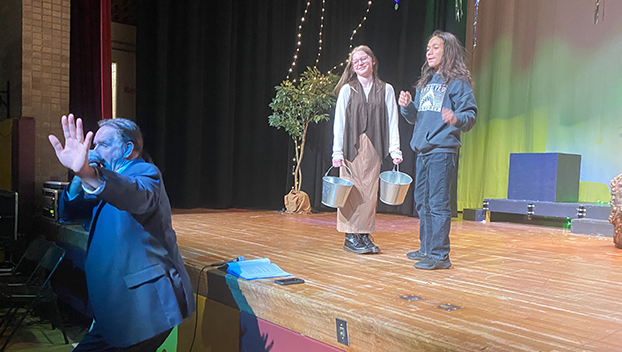 AMBROSIA NELDON | LEADER PUBLICATIONS Brandywine Principal and Shakespeare director James Boger demonstrates a silly face for an actress in "As You Like It" during practice last week.

NILES — For the first time in 24 years, Shakespeare has returned to the halls of Brandywine Elementary.

Brandywine alumni who graduated 2009 and before likely remember donning Medieval garb and learning to speak Early Modern English as they rehearsed and performed one of many plays written by William Shakespeare. Today, the long-honored tradition once carried on by Brandywine’s fourth grade teachers has been revitalized by the school’s principal, James Boger.

This weekend, the fruits of their labor come to life on stage as a group of sixth graders perform “As You Like It.”

“We’ve been talking about it for a while, since I came back to this building,” said Boger, who previously held roles of assistant principal and athletic director at Brandywine Middle/Sr. High School. “The kids have not had a lot of opportunities these last two years. That’s what’s driven it.”

Boger believes that education is about more than lessons inside textbooks, and that students learn as much outside the classroom as they do inside.

“Kids remember their experiences and how they’re treated at school,” he said. “How many kids do we know who have gone through this [Shakespeare] experience and remembered it forever?”

Though many of the more than 20 cast members have experience on stage, “As You Like It” has unique challenges due to the language and subject matter. This challenge is what drove Ben Miracle, who plays Orlando, to go out for the show.

Boger said much of the Shakespeare experience has been the same as alumni experienced, but they will also see some differences. For instance, instead of fourth graders performing, this cast is full of sixth graders.

“The things that are exciting that are new are one, they get to be on the stage here, which has a phenomenal lighting system,” Boger said. Previous shows were performed on the stage of the high school’s Carlson Lecture Hall. “Everybody’s microphoned.”

Although this is his first foray into directing, Boger is no stranger to the stage. The elementary school teacher often performs live music at venues throughout Michiana, created the elementary band The Toonas, and has spent countless hours assisting with his wife’s choir concerts and musicals. Denise Boger, the district’s choir director who plans to retire this year, has directed dozens of musicals while her husband offered backstage support.

“Now Mrs. Boger is supervising me!” Jim Boger joked when asked his wife’s role in the show. “It’s been a good experience for me to be in my wife’s shoes. Normally I do the tech stuff and that was all I did. I understand now more the stress of helping kids performed. Getting up there and having them do things that are kind of uncomfortable. So far, I’ve only had to be redirected by my wife a couple times.”

Alison Murray, who plays the female lead, Rosalynd, encouraged the community to come enjoy the show.

“We’ve been practicing for a really long time, and we’ve put a lot of work into it,” she said.