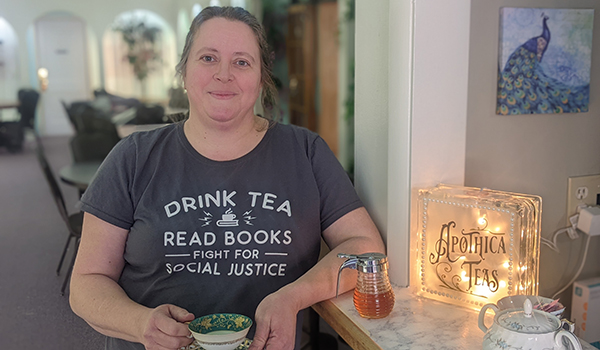 NILES — Sometimes knocking a hole in the wall can improve a whole lot of things.

Just ask Apothica Teas owner Laura Hollister, whose shop opened for business Wednesday after the completion of its renovation project.

The project consisted of joining the business’ main space called “The Apothecary” and its expanded space called “The Conservatory,” which occupies the old Thayer’s storefront next door, as well as connecting the two kitchens together and reorganizing that space. The Conservatory opened in September and offers a bright, new space for additional seating and private events.

“It’s a very different atmosphere over there,” Hollister said. “You’ll be able to come in and choose your adventure, whether you want the steampunk apothecary or whether you want the relaxing English garden and the fountains going and Yo-Yo Ma in the background. It’s wonderful.”

While the expanded space was a boon for business, servers and customers had to exit the Apothecary side in order to enter the Conservatory side.

“Reservations kept climbing and we were using it every Saturday and using it a lot,” she said. “It was a lot of running around outside and it was awkward and weird.”

After receiving consent from their landlord, the Hollisters decided to move forward with the project. A section of the wall was removed to allow workers and customers to access either space from the inside. According to Hollister, connecting the two spaces would not have been possible without the $21,000 Match on Main grant the business was awarded by the Michigan Economic Development Corporation last month.

“We applied for the Match on Main grant and they were wonderful,” Hollister said. “Since we had already applied before, they had seen a lot of the nitty-gritty of our business and then got to see a year later even though it’s COVID, we’re doing well enough that we could look at expansion. Our numbers justified the space and we received the grant. That’s the only reason we could do it now. All of this is all the Match on Main.”

The Hollisters hope the additional kitchen space will allow them to increase the menu and offer some meal-type options.

“Right now, we’re technically a non-alcoholic snack and beverage bar,” Hollister said. “If I want to have meat, I’m gonna have to shift to an actual restaurant and I haven’t investigated what’s involved in that. The goal is to be able to have things like Scotch eggs and Cornish pasties in addition to the afternoon teas and lunch plates.”

Hollister believes the new items would bolster the menu while maintaining Apothica Teas’ niche in the business scene.

“It’s still on theme,” she said. “I’m not competing with anybody else. It’s still a niche, silly, fun thing to do. … It’s important to me that whatever I do complements what my neighboring businesses are doing. Competition is perfectly fine but I just don’t care to do it myself.”

Combining the Conservatory and Apothecary will give the business 65 seats in total, up from the Apothecary’s 29. Hollister hopes the change will allow for more walk-in, casual traffic and offer more financial stability.

“Some of our decisions have made it more difficult to be profitable,” Hollister said. “We don’t pay server wages; our lowest-paid person is $11 an hour and then the tips are pulled and distributed amongst all the employees because the person washing the dishes is just as important to the experience as the person serving your tea. But that keeps our labor costs extremely high and they were already going to be when you have a business that’s using vintage china and a ridiculous amount of glassware and silverware just for the fun of it. It’s still gonna be a very high labor cost. But I think that additional seats will allow us to make it a healthier percentage of cost.”

Despite opening in 2019, Apothica Teas has been fully open for less than a year due to the pandemic. Even so, the tea room has established itself as a destination for customers seeking an unique beverage experience.

“I really thought that our customers would all be coming from 10 miles away or less and that’s not what’s happening,” Hollister said. “I’m just shocked by how far people are coming from and how often it comes up that we’re in a different time zone. We get people from Chicago, Grand Rapids and Indianapolis regularly. It’s not like occasionally family will show up. It’s shocking how often people will travel for that afternoon tea.”