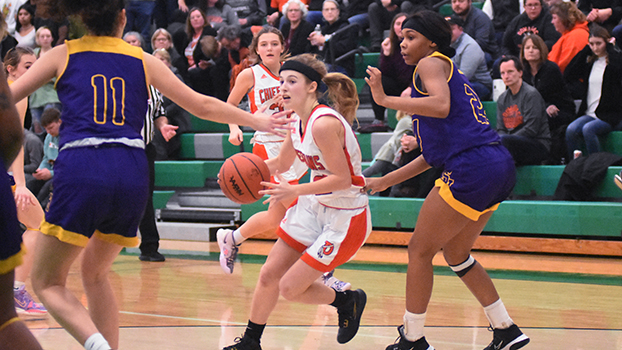 DOWAGIAC — Two teams, Dowagiac and Edwardsburg, have different agendas tonight as they play in the Division 2 Girls Regional semifinals at Vicksburg High School.

The No. 6-ranked undefeated Eddies are trying to get past an Otsego team it is facing for the third time this season. Dowagiac is playing in its first regional since 2008.

Although they appear to be on different paths, the goal for the Eddies and the Chieftains is the game. Win and advance to Thursday night’s regional championship game.

Edwardsburg (22-0) expected to be here after reaching the regional championship in 2021 before falling to Wayland 61-48 on its home court. The Chieftains were 2-13 at one point during the 2021-22 season before catching fire and winning seven consecutive games and its first district championship in 14 years.

Chieftain Coach Jason Turner is not worried about how his team will perform tonight.

“I am not worried about our players having the ‘deer in the headlights” look tonight,” he said. “They have been working hard all year and we have focused a lot on playing relaxed and having fun while playing. The message is going to be to continue what we have been doing the past seven games — ‘Go out there, play hard, have fun, and leave it all out on the floor.’”

According to Turner, the Chieftains must keep the Wildcats attacking the basket and playing solid defense on the perimeter.

“Keys to stopping Wayland is shutting down the driving lanes as well as closing out with a hand up on all shooters,” he said. “We also have to control the ball and not turn the ball over against their 1-2-2 [defense], but also be able to push the ball when we get a defensive rebound or steal.”

In last week’s district tournament, the Wildcats (14-8) reached the regional semifinals by defeating Hamilton 45-42 and Holland Christian 51-48. The two teams were a combined 23-20 on the season.

Dowagiac defeated No. 1-seeded Benton Harbor and then South Haven to reach the regional semifinals. What this means to Turner’s program and community is special.

“It is hard to put into words what a win tonight would mean for the Dowagiac girls basketball program,” he said. “I am not sure if we have ever even advanced to the regional championship game and that would be just amazing for these girls and the whole community. It would continue to get interested in the youth girls so we can continue the progress we have been making the past three years.”

Edwardsburg is looking to advance to the regional finals for the second straight season.

The team, which has just eight varsity players and a total of 16 girls in the basketball program this season, blew out Otsego (18-4) in the first meeting in January 52-32. The Bulldogs made it much closer when the two teams met for the Wolverine Conference championship Feb. 24. The Eddies defeated Otsego 54-42 despite foul trouble and playing without one of its top reserves Caitlin Tighe, who had suffered an ankle injury a week earlier.

Edwardsburg Coach Jon Pobuda felt his team did not give its best effort in the second meeting as it was still adjusting to the loss of Tighe.

“I didn’t think we played particularly well against them last time and did some uncharacteristic things,” he said. “We need to make sure we execute our game plan and continue to do what we do, but hopefully clean things up. The girls weren’t happy with their performance when we played them last, so they are going to be motivated to go out and play well. This is a good Otsego team and we are going to have to play solid basketball to beat them a third time.”

Although Tighe has returned to the lineup, she is not 100 percent.

“Tighe is still a little banged up, but everyone else is healthy and ready to go,” Pobuda said. “These girls bleed orange and blue and are always going to play hard for 32 minutes.”

Poduba added that his team cannot afford to look past the Bulldogs, who defeated Wolverine Conference foes Plainwell (50-28) and Paw Paw (in overtime) to win their first.

Tipoff for the second semifinals is scheduled for 7 p.m.