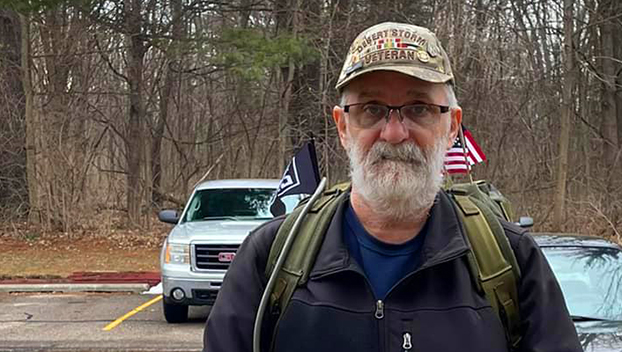 NILES — If you see a man walking the streets of Niles with a ruck on his back decked out with American and Mission 22 flags, make sure to wave or honk your horn.

Niles resident John Sly is participating in Mission 22’s 48-mile Ruck Challenge, which consists of participants walking, running, or rucking — walking with a weighted backpack, or “rucksack” — their way to 48 miles through the month of March, all while raising funds for Mission 22.

According to its website, Mission 22 is a national community supporting active service members, veterans and their family members through support and treatment programs, social impact and memorials. The organization is so named because of the widely circulated statistic that 22 veterans commit suicide each day.

Sly hopes to raise $400 for the cause. Readers looking to donate can do so on Sly’s Facebook fundraising page titled “John’s fundraiser for the 48 mile challenge” or can donate to Sly in-person if they see him out rucking down the street.

A 21-year disabled army veteran and a lifetime member of American Legion and Veterans of Foreign Wars, Sly first came across the challenge on Facebook and decided to participate in the challenge and raise funds for Mission 22 after experiencing the toll military service took on his mental health and seeing it impact others.

A 2021 study by the Costs of War Project at Brown University found that roughly four times as many active-duty personnel and veterans of post 9/11 conflicts have committed suicide than have died during military operations in the same span.

“We don’t talk about the stuff that affects us,” he said. “A lot of times we’re trying to forget it, but the reality is that we will never forget.”

Sly has been attending local Veterans Administrations for years to receive assistance and acknowledges it as a major asset in his well-being.

“They help out as much as they can, but you need to help them help you,” he said. “It’s there for you but if you don’t take advantage of it, it’s not going to help you.”

Sly rucked 3.5 miles on his first day of the challenge on March 1 and plans to ruck several days per week to reach his goal for the month. While his route up until now has been centered around his neighborhood in Niles Township, Sly plans to ruck in and around the downtown area to increase exposure and spread awareness.

When all is said and done, Sly hopes the community will come together and support mental health awareness.

“I want them to be aware of the mental health issues veterans experience on a daily basis,” he said. “It’s not just the military, it’s [first responders], too. They see horrible stuff that mirrors wartime in some aspects, and they have to deal with it. They have their own system for mental health like the military does, but we all need to do a better job for all us because even one suicide per day is unacceptable in my eyes.”