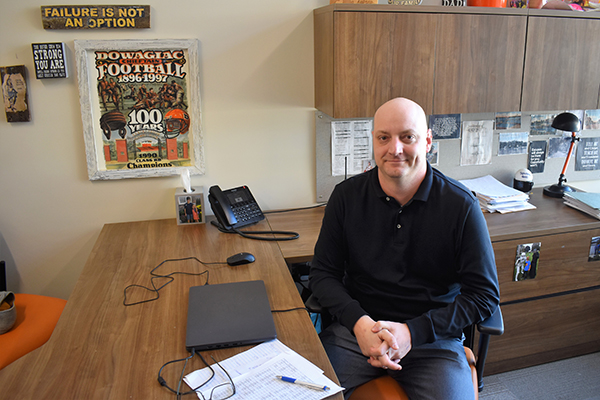 DOWAGIAC — When Bryan Sperling arrived at Dowagiac Union High School to fill the role of assistant principal in fall 2018, he said he was looking for a new challenge.

More than three years later, Sperling is ready to tackle another challenge as he takes over as interim principal at Dowagiac Union High School following the resignation of Principal Stephanie Mitchell in February.

Sperling, who has a master’s degree in teaching from Grand Valley State University, previously worked in Grand Rapids Public Schools before being hired in Dowagiac. He said the transition from assistant principal to interim principal has been fairly smooth, as he is already involved with teacher evaluations, master scheduling and student discipline.

“So, there’s more on my plate, but it’s more of the same thing,” Sperling said. “With [former principal] Kelley Millin, and with Stephanie, it’s something we really tried to make a partnership.”

Due to the high level of turnover the school has seen recently, Sperling said everyone at the school is used to adapting, and said the district’s central office has been stepping in with teacher evaluations.

“They’re all just chipping in where they can,” Sperling said. “A lot of people are stepping up to help out with student management, things like that – stuff I have a little less time to take care of right now. … The support staff are all amazing. Literally everything that’s been smooth [with the transition] has nothing to do with me. It’s because the staff is so good. They fill in when they can, they do extra work when they can, they give up planning hours to teach another class when they need to – this staff is amazing. And it’s not just teachers, it’s the lunch ladies, it’s the secretaries – they probably work harder than anyone in the building.”

One of the biggest changes Sperling has had to manage is having more administrative paperwork, but he has not lost focus on what he believes is important as an administrator.

“Being a presence in the school is vitally important to me,” Sperling said. “I make it a point to still be visible because I think the kids have to see you.”

With teachers and staff, Sperling said he wants to give everyone the opportunity to do what they do best.

“I’m not a micromanager, I’m not one that’s going to nitpick everyone. It’s about empowering them,” he said. “Sometimes there are things I don’t do well that they do better than me, so it’s acknowledging that and letting them do it.”

In terms of dealing with students, Sterling said it is important to let them make mistakes and learn from them.

“I want to give kids every resource they need to be successful,” he said. “Right now, I mean, a lot of that is just time and forgiveness. … I mean, it makes everything easier when you have a good rapport with the kids and adults. If a kid comes in your office and they hate you and you have to discipline them, it’s a lot more difficult than if you have a good rapport. You can say, ‘hey, this is what you did wrong. This is what I want you to do better the next time.’ Now, does that mean I have a good rapport with everyone in the building? No, sit here and say that, but yeah, I think it’s huge. I mean, without a relationship, it’s hard to do anything.”

Sperling said he has not thought about applying for the permanent principal’s position, and is just trying to get through the rest of the school year.

“I’m not worried about the next game,” he said. “I’m just focusing on game ahead of me.”