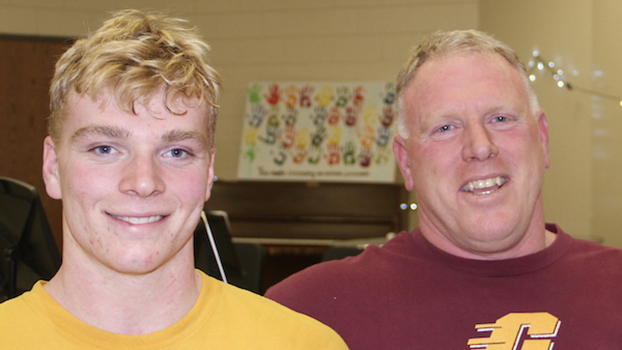 (Editor’s Note: Dowagiac’s Andy Staten was the runner-up in Class B in 1993. His only losses the entire season came at the hands of Rollie Ferris.)

DELTON — Nearing the end of a stellar four-year wrestling career, Caden Ferris has just one complaint: Not enough mat time.

That is not a knock on his coach, but a nod at his record.

The Delton Kellogg senior will take a 45-0 record into this weekend’s MHSAA Division 4 Individual Wrestling Finals at Ford Field.

Of those wins, 32 came by pins, with just one match making it to the second period. The other 13 were by forfeit.

Although he talks of “more mat time,” he will definitely take the pins as he works toward repeating at 215 pounds.

If that happens, he will become just the second wrestler in school history with two individual finals titles.

In fact, wrestling is the Ferris family’s legacy at Delton Kellogg.

“It’s always been in the family, and I’ve always been going to my brother’s practices and tournaments,” said Caden Ferris, who started wrestling in sixth grade.

“I sometimes wrestle my brother in the backyard, but not a lot. He’s four years ahead of me.”

Wrestling his dad has a different spin.

“He tried once. It didn’t work out in his favor,” he added laughing.

During his freshman year, Ferris posted a 36-19 record, and those losses fueled his desire to win even more.

Rollie Ferris began wrestling in third grade, but honed his skills early, growing up on a farm with five brothers.

“We’re just always competitive,” he said. “When I had the chance to start wrestling in third or fourth grade, it was just a natural for me.

Delton Kellogg wrestling“I always enjoyed competing, then you get your hand raised, and then you get medals. It was awesome.”

Rollie Ferris’ journey did not start out “awesome.”

“My very first time wrestling (as a third grader), I got thrown on my back in a headlock by a kid I didn’t know at the time,” he recalled. “I was crying.”

His skills improved immensely from that first pin to his two Finals titles in high school.

Although he attended Central Michigan University on a football scholarship, he wrestled for coach Tom Borrelli for two of those years.

Borrelli is still coaching at CMU, where Tyden is a senior on the football team.

Because of that connection, “I’ve always been up at CMU and wrestling with them and getting to know the coaches since I was real little,” Caden Ferris said.

So, when Coach Borrelli called to offer his son a four-year wrestling scholarship, “I was in awe because I know that wrestling doesn’t always get all that,” Rollie Ferris said. “Caden was offered before he even got a state championship last year.”

Having Ferris on the Delton Kellogg team is a tremendous asset, coach Dan Phillips said. “You can always count on six (points) from him when he goes on the mat.” he said. “He’s a great leader on our team and vocal on the bench.

As for so many pins, “He’s relentless. If you make a mistake on the mat, he’ll capitalize on it. Plus, he’s strong.

With several young, inexperienced wrestlers on the team, Phillips said this is a rebuilding year.

While the Panthers did not qualify for Team Regionals, four other wrestlers competed individually, including junior Joelle White (110) in the MHSAA’s first-ever girls tournament. Junior Gage Vincent (119) will join Ferris at Ford Field.

To prepare, Ferris has followed his dad’s advice.

“I do a lot of running, bike, weight training, a lot of mat time, drilling with anybody I can find to throw around,” he said.

“I’m wrestling seven days a week, including Grand Rapids, with all sorts of coaches.”

His dad said that takes a lot of dedication.

“I’m extremely proud of him, not only for the wins, but he wants to put the work in,” he said.

“We live in Delton, which is an hour to anything, so you have to be willing to be in the car and go places to do things. He’s willing to do all that.”

Caden Ferris’ mother, Marie, has been witness to it all.

“I call her my kids’ free agent,” Rollie Ferris said. “She’s just out there pushing for them, talking to people and setting up stuff constantly.

“She’s been with me since I was 16, so she watched both me win state twice and Billy win.”

She has also been there to cheer on her sons and daughter, Faith, in their sports endeavors.

One thing their father has learned is “not to be mat side with them so much,” he said. “The coaches do a good job with them.

“I’ve learned with my three kids to let other people coach. I want to be their dad, although I still probably am a little bit more intense than I should be.”

Once his son graduates in the spring, there will be a lull in the Ferris family wrestling tradition at Delton Kellogg until Rollie’s nephew Mason gets to high school. A sixth-grader, Mason is also a wrestler.

For Caden Ferris, before the pomp of graduation, there are a few hurdles to face to go with next week’s big opportunity.

Rollie Ferris knows, in spite of his son’s success, nothing is guaranteed.

“As a dad, I’m always nervous there’s somebody in the closet that we don’t know,” he said. “Just like I tell these kids all the time, to be somebody, you’ve got to beat somebody.

“If I’m somebody out there wanting to wrestle Caden, if I’m his dad, I’m telling him we’ve got to beat this kid. He’s gonna be sitting up there not hungry. He’s got to beat the guy in the mirror.”

Pam Shebest served as a sportswriter at the Kalamazoo Gazette from 1985-2009 after 11 years part-time with the Gazette while teaching French and English at White Pigeon High School. She can be reached at pamkzoo@aol.com with story ideas for Calhoun, Kalamazoo and Van Buren counties.