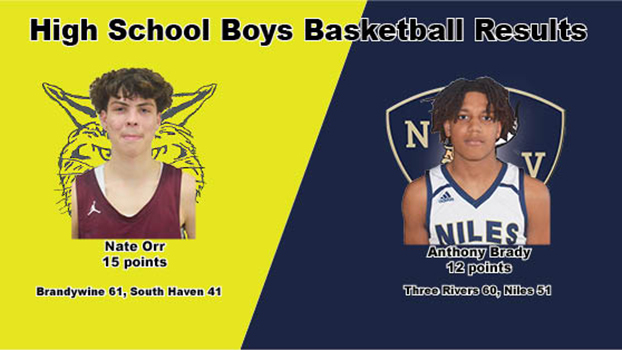 The Bobcats, winners of six straight games, finish their division schedule with a 5-1 record. Berrien Springs finished second with a 4-2 record. Brandywine is now 13-4 with non-conference games left against visiting Wolverine Conference South Division champion Edwardsburg Tuesday night and a road contest against Lakeshore in the regular-season finale.

It was all Brandywine in the final 16 minutes as the Bobcats outscored South Haven 41-19 to turn the game into a blowout.

Nate Orr led a trio of Brandywine players in double figures with 15 points. Jamier Palmer and Carson Knapp both finished with 11 points.

Ray Parks and Damon Jackson led the Rams with 15 points each.

Niles could not overcome an early deficit as it dropped a 60-51 Wolverine Conference South Division contest to host Three Rivers Friday night.

Anthony Brady led a trio of Niles players in double figures with 12 points. Mike Phillips and Jayson Johnson both finished with 10 points.

The Vikings wrap up the regular season by hosting a yet to be determined Wolverine Conference in a crossover contest.