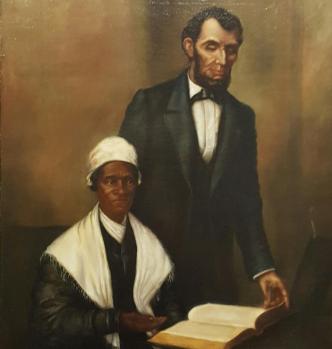 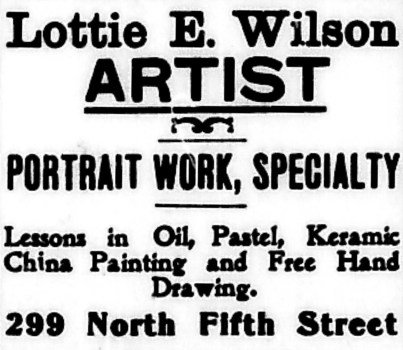 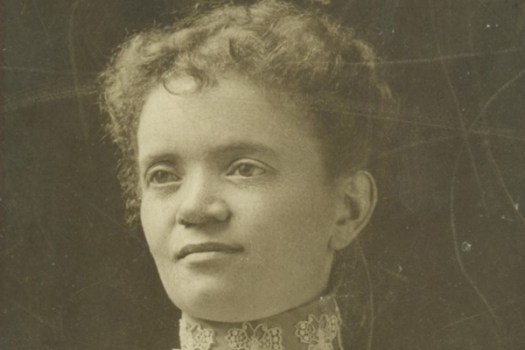 NILES — Every year, Presidents Day is used to honor the U.S. Presidents and George Washington’s birthday. More than 100 years ago, a Niles native gave the President a gift the White House would cherish for decades.

In 1902, artist Charlotte “Lottie” Wilson presented her most famous work, “President Lincoln with a Former Slave,” to President Teddy Roosevelt. The painting depicts the historic 1864 meeting between President Abraham Lincoln and Sojourner Truth.

“The impact she made through her art was pretty remarkable,” said Niles History Center Director Christina Arseneau. “She was the first African American to have her work displayed at the White House that we know of.”

Wilson was born in Niles in 1854. Her father, Calvin Wilson, was a charter member of the Niles Harrison Lodge, the first African American masonic lodge in the state of Michigan who in 1868 helped found Ferry Street School for the area’s African American students on the corner of Seventh and Ferry Streets, three years before every public school in the city integrated. The building is still in use today as the Ferry Street Resource Center, providing connections to education, employment and social services to the community.

Wilson pursued a college education and became the first African American woman to graduate from the School of the Art Institute in Chicago. Throughout her life, Wilson created several works that captured the time period, including historic paintings, portrait landscapes, fine needlework talent and china paintings, which may be found around the eastern part of the country.

While she created art to make a living, she was also an art teacher, offering classes in oil painting, pastels, ceramics, drawing and conservation.

The famous artist was also an advocate for women’s rights, civil rights and education. She was the first superintendent of the National Association of Colored Women and also served as a delegate to the 1899 National American Women’s Suffrage Association Convention. Her efforts and achievements earned her a place in the Michigan Women’s Hall of Fame in October 2016.

The painting came into possession of a conservator during an auction in the 1980s and the conservator discovered that inscribed on the back of the art was Wilson’s name and hometown. The conservator contacted the Niles District Library, which then purchased the painting in 1982. The famous painting is currently on display at Fort St. Joseph Museum but will be relocated in the coming weeks to the NDL for an exhibit on women’s suffrage movement.

Wilson passed away in 1914 after a battle with cancer and is buried in Silverbrook Cemetery along with members of her family.

Today, her family and Niles historians continue to preserve her legacy. In January 2017, Sen. John Proos presented Wilson’s cousin, Pat Gresham, with a tribute recognizing Wilson’s accomplishments. According to family members, her home remains at the corner of Fifth and Ferry Streets, where she would often host exhibits and teach class.