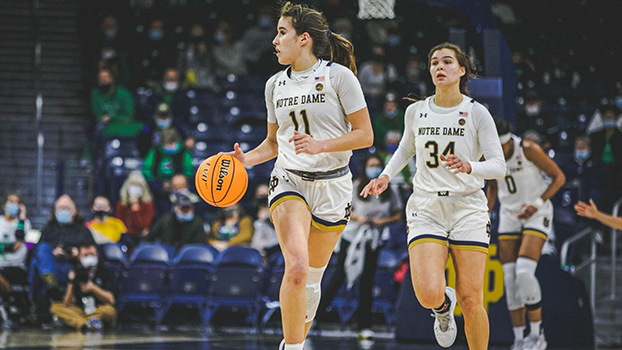 NOTRE DAME — The mission was clear for the No. 14 Notre Dame women’s basketball team on Thursday — defeat Clemson at home and receive a double-bye in the ACC Tournament.

With the win, the Irish also remained undefeated at home, improving to 13-0, and will look to complete the gauntlet against No. 4 Louisville on Sunday.

Sonia Citron produced her second-highest scoring total of the season, pouring in 23 points tonight. The New York native produced her fifth double-double on the year and second straight, reeling in a season high 13 boards. She also dished out a season best eight assists.

Maya Dodson recorded her sixth game with 20-plus points with 20 Thursday on an efficient 9-of-11 shooting. She also notched nine rebounds and five blocks. Olivia Miles also almost secured a double-double with 11 points and nine assists.

All five starters plus Brunelle got on the scoresheet in the first quarter. Mabrey hit two 3-pointers early, while Citron and Dodson ended the quarter on a combined 7-0 run to establish an 18-11 lead.

That extended into a 23-2 scoring run into the second quarter, as Citron had 10 of the 23 points. In fact, by halftime, Citron nearly had a double-double with 12 points and nine rebounds.

At the half, the Irish led 38-20, holding their opponent to 20 points or less for the second straight contest. Notre Dame caused 11 Clemson turnovers in the first half in which they converted to 18 points. In addition, the Irish shot over 40 percent in each of the first two quarters.

Clemson found a little rhythm to start the third, out-scoring Notre Dame 12-5 to pull within 11 points at 5:58. However, over the final 3:46 of the quarter, Notre Dame settled in and outpaced Clemson 11-6 to extend its lead to 56-40. Dodson scored five straight points during that stretch while Citron finally got her double-double.

Dodson scored eight of the team’s first 12 points in the fourth as the Irish never looked back, cruising to the 77-56 final. Dodson and Miles each flirted with their respective double-doubles while Citron was two assists shy of a triple-double.

One regular-season game left, and it’s the conference rival. No. 4 Louisville Cardinals coming to town Sunday, and puts the undefeated home record to the test. That matchup tips off at noon on ESPN2.