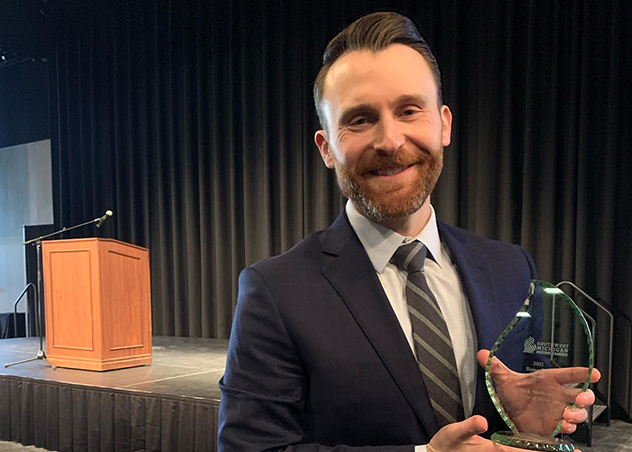 Shelton was recognized as a leader in the community not only for his work as the mayor of the City of Niles, but as a fourth-generation fruit peddler at Shelton’s Farm Market, which celebrates its 75th anniversary this year.

“If you’ve ever been lucky enough to have a conversation with our Rising Star, Nick Shelton, then you know he is a man of many titles with a big pride and passion for his community,” SMRC CEO Arthur Havlicek said Thursday.

After being recognized with the award, Shelton shared thanks with many, including those giving the award, city council members and city staff, and his wife.
“My proudest moments as mayor revolve around the way our community rallies and bounces back from adversity, including a tornado in 2017, flood in 2018, polar vortex in 2019, and the pandemic 2020-now,” he said. “We care for one another. We take care of each other. We have each other’s backs, and I am so proud of that.”

Shelton graduated from Brandywine High School in 2004 and Albion College in 2008. When he’s not working with the family business and attending city events and meetings, he enjoys beatboxing, songwriting and performing. He is married to local broadcaster Allison Hayes-Freeze Shelton, and has three children, Emery, Rocky and Mickey.

“At Shelton’s I have had, and continue to have, the opportunity to work alongside my dad, Mike, and my 91-year-old grandpa Jimbo, which leads me to the last couple of people I need to thank: My mentors,” Shelton said Thursday. “You see, 91-year-old Jimbo, the mythical fruit peddling animal that he is, iis the perfect example of a rising star. He has found a way to grow, and learn, and ripen, and continue to rise in spite of his age, and the changing world around him. Jimbo is the type of man who works seven days a week, not for the check, but because he is passionate about what he does, and cares for the people he works with and encounters.”

Shelton said his father and grandfather have shown him that despite the many differences in his roles as mayor and CFO — chief fruit officer — the essence of the roles are really the same.

“At the end of the day, they are both about taking care of people, and making a positive mark on the world we live in,” he said.

Close to 250 guests joined the event either in-person at the Lake Michigan College Mendel Center’s Grand Upton Hall or virtually via Zoom as new Michigan Chamber President & CEO Jim Holcomb provided a keynote that included an economic update for the upcoming year. Southwest Michigan Regional Chamber President & CEO Arthur Havlicek recapped 2021 and shared part of the 2022 vision for the Chamber, which included restructured dues tiers, and the launch of the new Your Voice for Business Podcast.

“Looking back on everything we’ve accomplished over the last two years, plus where we have successfully positioned ourselves for in 2022 and beyond, we are extremely excited for what the future holds for our organization as well as Southwest Michigan as a whole,” Havlicek said. “We are a stronger organization than we were pre-pandemic and we can’t wait to share and build upon that strength with our members.”