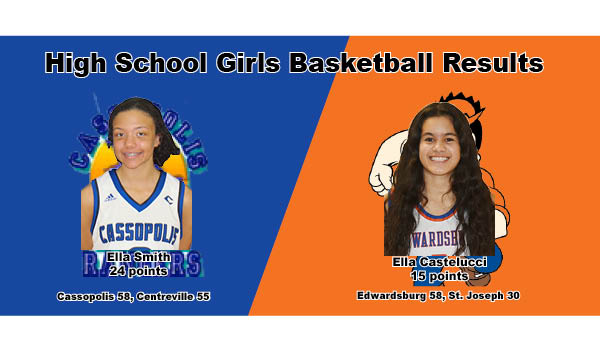 The No. 6-ranked Eddies (19-0) used a balanced scoring attack to defeat the Bears, who fell behind early and were never able to recover. St. Joseph (13-4) trailed Edwardsburg 13-7 after one quarter and 27-1 at halftime.

Edwardsburg increased its advantage to 40-21, heading into the fourth quarter.

The Eddies also got some good news as Lindsey Dalenberg returned from an ankle injury she sustained against Niles Feb. 18.

The Rangers won their second straight game as they defeated visiting Centreville for the second time this season. In the fourth quarter, Cassopolis outscored the Bulldogs 21-18 for a 58-55 Southwest 10 Conference victory.

The win improved the Rangers’ overall record to 12-7, while also improving their mark to 11-6.

Ella Smith had a game-high 24 points lead Cassopolis, which also got 11 points from Atyanna Alford and 10 points from Zaniya Dodd.

The Bucks (15-5) got off to a slow start against the host Wildcats, trailing 10-2 after the opening quarter of its 38-30 non-conference loss at Mattawan Tuesday night.

The Wildcats got a game-high 15 points from Yasmin Pirbbai. Delaney Elsmore added 12.

Buchanan will now set its sights on the Division 3 District Tournament at Watervliet High School. The Bucks will face arch rival Brandywine for the third time this season. The two team split their BCS Athletic Conference Red Division contests.