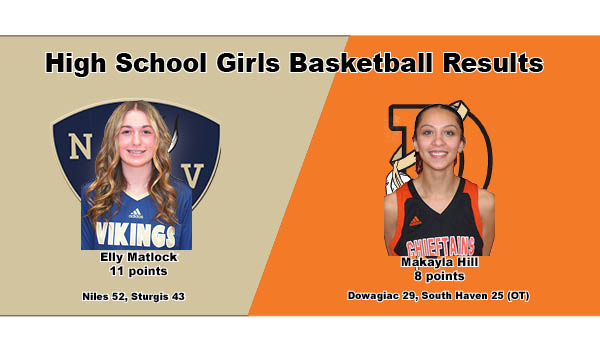 DOWAGIAC — It was a struggle, but the Dowagiac girls basketball team ran its winning streak to four games Monday night.

The Chieftains needed overtime to defeat former Wolverine Conference foe South Haven 29-25. The win improved Dowagiac to 6-13 on the season.

Dowagiac outscored the Rams 4-0 in overtime to keep their winning streak alive.

“Tonight was a battle,” said Dowagiac Coach Jason Turner. “We did not play the type of basketball we have been playing the last three games, but we battled and squeaked out our fourth straight win. Some of the credit has to go to the defense that South Saven was playing in the first half. They did a great job making it difficult on us. We had to make some adjustments defensively at halftime to allow our defense to create some offense.”

The Chieftains, who host Allegan in their Wolverine Conference crossover Thursday night to conclude the regular season, played long-ball in the closing moments of regulation and in the overtime.

“At the end of the game, we had some big threes from our two seniors,” Turner said. “Makayla [Hill] hit two big threes to get us into overtime, and Calley [Ruff] hit a big one in overtime. Overall, we battled back as a team, and I am proud of them. It was a good win to continue our streak and to have a close game as we are winding down getting ready for districts.”

Despite being held to a single free throw in the second quarter, visiting Niles was able to get past Sturgis in its Wolverine Conference South Division finale Monday night.

The Vikings (8-11, 4-4 Wolverine South) scored 31 second-half points, while holding Sturgis to 21 to earn the victory. The win left Niles in third place in its Wolverine South debut. Sturgis finishes second behind undefeated Edwardsburg.

Amara Palmer led a trio of Vikings in double figures with a game-high 22 points. Elly Matlock and Natalie Lucero both finished with 11 points.

Yurtidiana Villafuerte had 13 points to lead the Trojans.