Irish get key road win in overtime at Georgia Tech 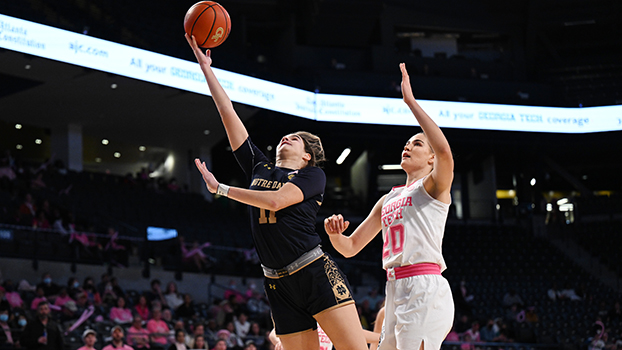 ATLANTA — It was circled on Notre Dame’s calendar as a pivotal game between two teams vying for the coveted double-bye spots in the ACC Tournament.

In the end, it was the No. 19/20 Fighting Irish women’s basketball team that gutted out a tough 72-66 overtime road win at No. 16/18 Georgia Tech Thursday night inside McCamish Pavilion.

The Irish (20-6, 11-4) outscored the Yellow Jackets 11-5 in overtime, picking up their first true road win against a ranked opponent this season.

Olivia Miles led with 18 points and eight assists. Dara Mabrey came up big in overtime, where she scored six of her 11 points.

Just 30 min away from her hometown of Alpharetta, Maya Dodson gave her cheering section something to cheer for with an 11-point, 11-rebound double-double. Sonia Citron also added a double-double with 10 points, 11 rebounds. For Dodson and Citron it was their seventh and fourth double-doubles of the year, respectively.

Georgia Tech (19-7, 10-5) started 2-of-3 from three to jump out to an 8-4 lead but the Irish buckled down and began to disrupt the Yellow Jacket offense. The Irish produced a 10-0 run from 3:53-0:46, then later hit a half-court buzzer-beater, courtesy Maddy Westbeld, to earn a 17-10 lead. Dodson had six points in the first as six different Irish had registered points.

The Irish defense left its mark in the second quarter, creating four Georgia Tech turnovers in a four-minute stretch, equating to an 8-0 Irish run in which Westbeld and Peoples had tallied four points each. Dodson and Miles extended the run to 13-1, building a big 30-14 advantage.

However, Georgia Tech was able to pull together a rally in the final two minutes of the half, recording a 6-0 run to make it 30-20 at halftime.

At the midway point, Dodson nearly had a double-double with nine points, nine rebounds. Westbeld followed right behind with seven points, five boards. Notre Dame had outrebounded Georgia Tech 27-15 in the half and outscored the Yellow Jackets 26-6 in the paint.

Georgia Tech came out red hot in the third quarter, making three triples in a 90-second span. Olivia Miles did her best to stave off the flurry, trading off the barrage with two of her own to keep ND in the lead, up 36-30 at 6:27.

The next five baskets for the Irish came from five different players as Notre Dame and Georgia Tech traded off baskets. The difference-maker of the quarter came at the very end where Citron knocked down a three before the buzzer for a 49-39 lead.

However, Georgia Tech recorded another stretch in the fourth quarter in which they unleashed three triples in a short span, pulling to within one at 58-57 at the 4:44 mark.

Fast forward to 43 seconds left in the game and it’s tied at 59-all, Irish ball. The hometown girl Dodson delivered in the paint to give Notre Dame a two-point lead with 29 seconds remaining. Down on the other end, Georgia Tech’s Lahtinen drove the baseline and connected on the layup. Next, it was Notre Dame ball out of a timeout with 6.6 seconds but the Irish recorded an untimely turnover resulting in the game going to overtime.

When Notre Dame needed clutch shots in overtime, Mabrey answered, connecting on a jumper before the shot clock at 2:56 and then a huge and-one at 1:23.

Up just two with under 30 seconds left, Miles was fouled and sent to the line where she converted both. A defensive stand later and the Irish were back on the line where Mabrey and Citron iced it.

After an off weekend, Notre Dame closes out its regular season with two straight games at home, starting with Clemson Thursday. The matchup against the Tigers will tip at 8 p.m. on ACC Network, as the program will honor its four seniors during a pregame ceremony. Then, the Irish end the regular season with No. 3 Louisville on Sunday, Feb. 27, in a special White Out game featuring the return of Skylar Diggins-Smith.