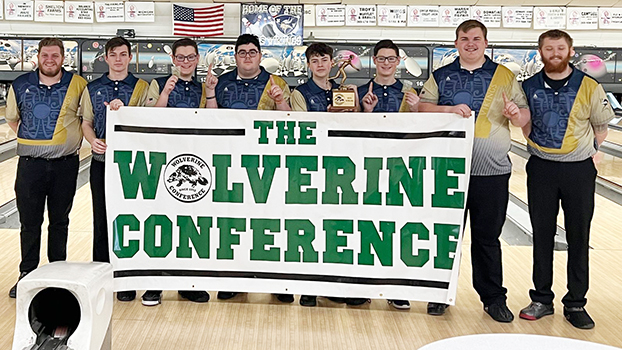 NILES — What a debut season it has been for the Niles boys varsity bowling team.

After finishing tied for first place with Allegan at 7-1 during the regular season, the Vikings defeated Sturgis in the conference tournament championship match, which Niles hosted at Joey Armadillo’s Monday.

Otsego and Vicksburg tied for sixth, while Edwardsburg, also a newcomer to the league in bowling, finished eighth and Paw Paw ninth.

The Vikings dropped their Wolverine Conference debut to Sturgis 15.5 to 15.0 before winning seven straight matches.

“Was fun seeing some different teams and playing the matches during the week was a lot different from our prior conference,” said Niles Coach Jim Jaynes. “Winning it is great. Winning is always great. What it boils down to now is, what are we going to accomplish at regionals?”

The Tigers were second in the regular with a 7-1 mark, finishing behind undefeated Three Rivers, which was 8-0.

Combining the regular season and tournament results, Allegan wins the outright championship, while Three Rivers is second, Sturgis third, Otsego fourth and Niles fifth. Like the Vikings, Edwardsburg, which finished sixth, made its conference debut in bowling in 2021-22.

Complete results from Monday’s conference tournament are currently unavailable. A complete wrap up of the tournament will appear in Saturday’s print edition of the Niles Daily Star and Edwardsburg Argus.