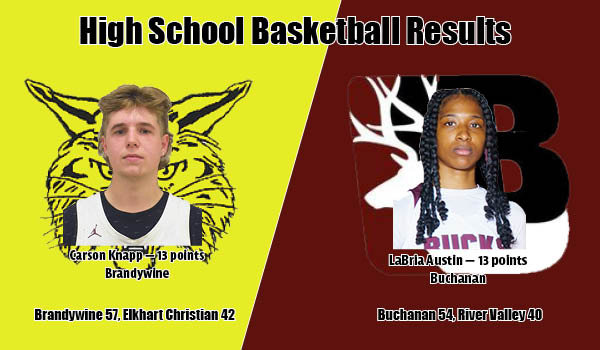 The Bobcats’ defense was even better in the third quarter holding the home team to a free throw. Brandywine meanwhile, scored 15 points to break the game open. The Bobcats took a 49-25 lead into the final eight minutes.

Matt Burns had a game-high 17 points for Elkhart Christian.

The Bobcats have a week off before hosting arch rival Buchanan, which has now won nine straight games following its 84-60 win over Eau Claire Wednesday night.

The Bucks (14-3) poured in 24 field goals, including five 3-pointers, to defeat the Mustangs, who led 12-8 after the opening quarter.

Buchanan regrouped during the break and outscored River Valley 17-8 in the second quarter to take a 25-20 halftime lead. The Bucks slowly pulled away in the second half, leading 41-33 after three quarters.

The Bucks are now off until Thursday when they host BSC Red Division leader Brandywine.