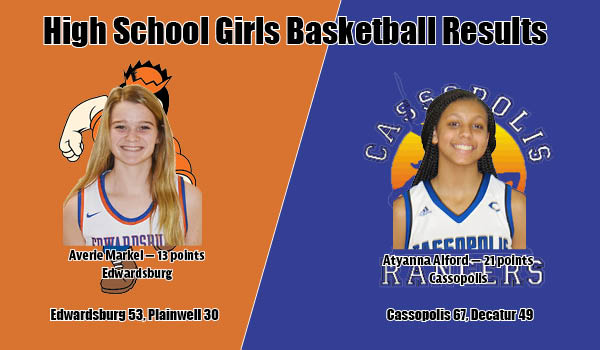 EDWARDSBURG — With its 53-30 win over visiting Plainwell, the Edwardsburg girls basketball team has now defeated every team in the Wolverine Conference at least once this season.

The Trojans were able to keep it close for a half, trailing 21-16 at the break, but unable to keep pace with Edwardsburg in the final 16 minutes of the contest in which they were outscored 32-24.

The undefeated Eddies, ranked No. 6 in the current Detroit Free Press Division 2 poll, have outscored their conference opponents 828-279. Edwardsburg is averaging 69 points a game against league foes.

The third quarter turned out to be the difference in the contest as the Eddies scored 16 points, while holding Plainwell to six. Edwardsburg took a 37-22 lead into the final quarter.

Averie Markel led a balanced Edwardsburg offense with 13 points, while Ella Castelucci and Abby Bossler both finished with 12 points.

Lauren Vanderstelt had a game-high 16 points for the Trojans.

The Eddies (15-0, 7-0 Wolverine South) return to the court Friday night as they travel to Vicksburg for a non-divisional league contest.

Coming off one of its best performances of the season, Niles struggled to put the ball in the basket in the first half and wound up on the wrong end of a 55-47 Wolverine Conference non-divisional loss at the hands of Vicksburg Tuesday night.

Niles (6-9) managed just 20 points in the opening half. Vicksburg, which is won its third straight contest, led by nine points (29-20) heading to the locker room at the intermission.

After three quarters, the Bulldogs (10-5) upped their advantage to 11 points (43-34) and then held off the Vikings in the final eight minutes.

The Vikings hit the road Friday night as they travel to Dowagiac to face the Chieftains for the second time in 12 days. Niles won the first meeting 52-42 on Jan. 31.

The Rangers (9-6, 8-5 Southwest 10) broke the contest open in the second quarter. Leading 17-13 after the opening eight minutes, Cassopolis exploded for 23 points while holding the Raiders to 14 points.

Cassopolis took a 40-27 lead into the second half and cruised home with the victory.

The loss dropped Decatur to 3-12 overall and 3-10 in league contests.

In the first half, the Wildcats outscored host White Pigeon 27-18 to earn their second win in three games Tuesday night.

Brooklyn Vantilburg scored a game-high 23 points to lead the Wildcats, who also got 17 points from Emma Holmes.