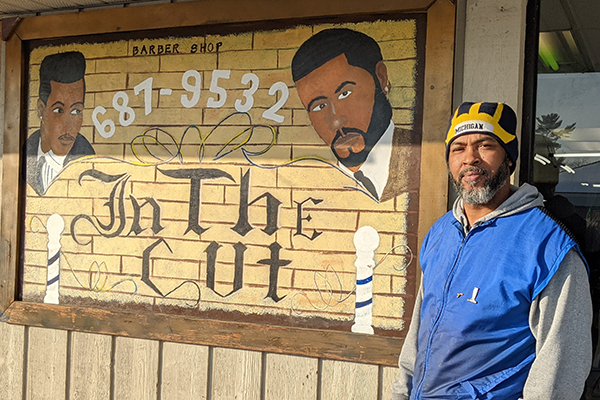 NILES — Customers casually walking through the doors at In The Cut Barber Shop, 507 Sycamore St., are always greeted with a hello and smile from owner Eric Williams.

His skill as a barber, along with his ability to create a welcoming environment for customers, has kept his business alive and thriving for 18 years.

Born and raised in Cassopolis, Williams learned the ways of the barber at an early age.

“I was raised by a single mom, and she really couldn’t afford to take us to the barber, so she cut our hair,” Williams recalled.

Once in middle school, Williams picked up a pair of hair clippers himself and learned how to cut hair for his family and friends.

“I picked up the clippers and started butchering the neighborhood,” Williams joked. “When you’re always doing family and friends for little to nothing, it kind of made me not even want to do this as a profession. But I’m really glad I did because it’s probably been one of the best things I’ve ever done as far as a job because of the freedom of being your own boss, the people you meet and the doors that it opens for you.”

After graduating from Ross Beatty High School, Williams decided to pursue a career in barbering and enrolled at a barber school in Kalamazoo. Williams made the 45-minute commute every day to perfect his craft. According to him, pursuing his career path would not have been possible without the support from his friends and family.

“I had people in my corner,” he said. “That did all the footwork and all I really had to do was just go apply and attend school every day and they even gave me a $1,000 gift for graduating. Right off the bat I had support to get started. And here we are 18 years later.”

After graduating from barber school, Williams founded In The Cut with his cousin in 2004. The duo first opened up shop at a location on Third Street before moving to their present location in 2006.

Despite being from Cassopolis, Williams believed that Niles’ location made it an ideal place to set up shop.

“The city of Niles is centrally located between small towns like Buchanan, Berrien Springs, Dowagiac and Cassopolis,” he said. “Within those same distances, you have South Bend, Edwardsburg and Elkhart. We did research on the demographics of just this city alone and it just seemed to be a good business move.”

Since its inception, In The Cut has been a space where people can enter and feel welcome.

“We’ve had someone from just about every walk of life come through these doors,” he said. “From pastors to just guys on the street. We’ve had drug addicts, homeless people come here looking for resources of where jobs might be hiring. We put out a good vibe. We don’t allow riff raff. We don’t allow kids to hang out in here if they are not in school, especially without their parents.”

Williams has even had some hair brushes with fame over the course of his career. He pulled out his phone and shared a photo he took with Muhammad Ali when the boxing legend visited his shop for a haircut years ago.

“I cut the champ’s hair,” he said. “Not many people in the world can say that, so that’s a great thing to have happened.”

Like Williams’ business, the City of Niles has grown and changed over the years. He likes where the city is going under the leadership of Mayor Nick Shelton and is happy to be a part of it.

“Niles is really progressing, or trying to,” he said. “This is a really good community to do things and try to start things. It’s obviously bigger than where I’ve come from, but it’s small enough where people know each other, people are supportive of each other, and people are in touch with what’s going on.”

The shop has played an active role in community efforts, having offered free haircuts to students going back to school and participating in several community events over the years. Williams himself delivered a speech during Cassopolis’ Martin Luther King celebration last month.

“When people are doing special things in the community, when they hold events, they place fliers and ask us if we want to be involved,” Williams said. “We have a good relationship with the police in this community. We have a really good vibe over here.”

Williams has been in the business long enough where he has seen several generations of his customers come through his shop. For Williams, cutting children’s hair goes beyond a simple haircut.

As busy as he is, Williams isn’t a one-man show. He has had many people assist him with cutting hair over the years and has mentored employees who have gone on to establish their own barbershops elsewhere. His current associate, William Hobbs, handles walk-in clients while Williams handles clients by appointment.

“I’ve got good coworkers with good values,” he said. “We are all role models, whether we tried to be or not. Kids look up to us and we try our best to live up to that.”

Recently, life has taken Williams from the barber chair to the pulpit. After taking sole ownership of In The Cut in 2016, he has been hard at work balancing work with his faith. After decades of being involved with his church, the Church of Cassopolis, Williams recently completed the necessary requirements to become a pastor there.

According to Williams, becoming a pastor was something that was always in the back of his mind, and he finally decided to pursue it.

I’ve known for a long time that that’s the direction my life was headed,” he said. “I took a huge detour for maybe 10-12 years, right? And you know, just like I said, I’m within the last six months, everything fell into place. I’m inexperienced; I don’t really know what I’m doing. But I believe everything that I’ve done in my life, from childhood to high school, to even a little military time and even working here at the barbershop, all of that has prepared me for this position.”

While Williams does not know what the future holds, he looks forward to growing both his ministry as well as his barbershop.

“Right now, my plan is still to continue to nurture the shop and the church,” he said. “I’m trying to keep a balance and I’ve already cut out working on Saturdays so I can be focused for Sundays. It’s still a learning process because I don’t know it all. I’m still trying to find my niche and I hope the ministry would grow and I hope this business grows. I wish I could get five chairs in here and step back from cutting hair. But you know, I take everything one day at a time and take it as it comes. I’m willing to accept whatever life brings.”