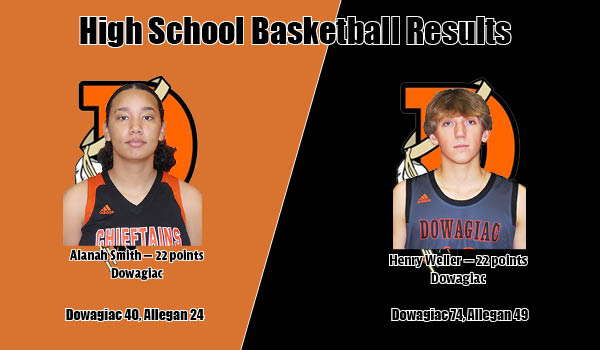 DOWAGIAC — For the third time this season, the Dowagiac girls basketball team walked off the court a winner.

The host Chieftains earned their second-biggest win of the year with a 40-24 victory over Allegan in a non-divisional Wolverine Conference contest Tuesday night.

Dowagiac did not let up in the final eight minutes of play as it stretched its final margin of victory to 16 points.

“Tonight, we played a good all-around game,” said Dowagiac Coach Jason Turner. “We were really close to playing a full 32 minutes of basketball. Alanah [Smith] had a big game offensively again, and we did a good job supporting her all around. I told the girls they needed to be proud of the win, and we need to continue to build off of it.”

Smith, who is among the top scorers in southwest Michigan, pumped in a game-high 22 points to lead the Chieftains and all scorers. Maggie Weller added eight points, while Josie Lock and Calley Ruff both finished with five points.

Dowagiac returns to Wolverine Conference South Division action Friday night as it hosts Niles. It will be the second meeting in 12 days between the two teams. Niles on the first meeting 52-42 on Jan. 31.

Although she fouled out, Turner was pleased with the defensive effort from Makayla Hill.

“Makayla does a great job at energizing us on the defensive end,” he said. “She had taken a ton of charges this year, and our team feeds off of her energy.”

The visiting Chieftains rolled to a 74-49 non-divisional Wolverine conference win over Allegan Tuesday night with its starting five back together.

Dowagiac (8-6) got a combined 42 points from twins Cole and Henry Weller, which helped the Chieftains take control in the opening quarter.

Dowagiac will host Niles in a Wolverine Conference South Division contest Friday night. The Chieftains rallied to defeat the Vikings 49-42 on Jan. 31.