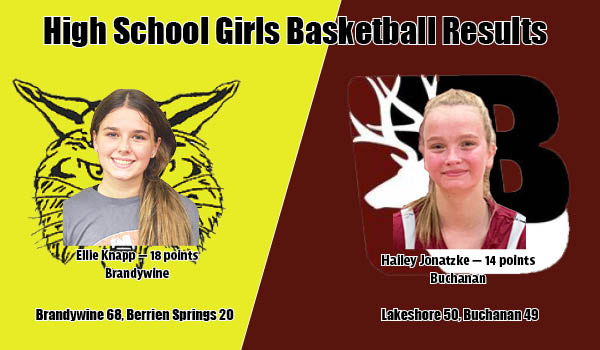 Meanwhile, in Stevensville, visiting Buchanan let a four-quarter lead slip away as Lakeshore edged the Bucks 50-49 in a non-conference contest.

Another fast start allowed the Bobcats (14-1. 4-0 BCS Red) to take control of the game and dictate the final outcome.

Brandywine led 18-4 after one quarter and 39-10 at halftime. A majority of the second half was played with a running clock.

Brandywine played without its second-leading scorer, Miley Young, who was sidelined due to n non-COVID illness.

Brandywine is back in action Wednesday night as it hosts Michigan Lutheran in a non-divisional BCS contest.

Visiting Buchanan let a 17-point halftime lead slip away as Lakeshore rallied for the victory.

The bucks (13-3) seemingly had the game under control after turning a 9-8 first-quarter lead into a 27-15 halftime advantage.

The Lancers (7-6) whittled the lead down to seven points, 38-31, by the end of the third quarter as they outscored the Bucks 16-9 in the quarter. Lakeshore then outscored Buchanan 19-11 in the fourth quarter to pull out the victory.

Buchanan is back on the court Thursday night as it travels to Three Oaks to face River Valley in a non-divisional BCS contest.