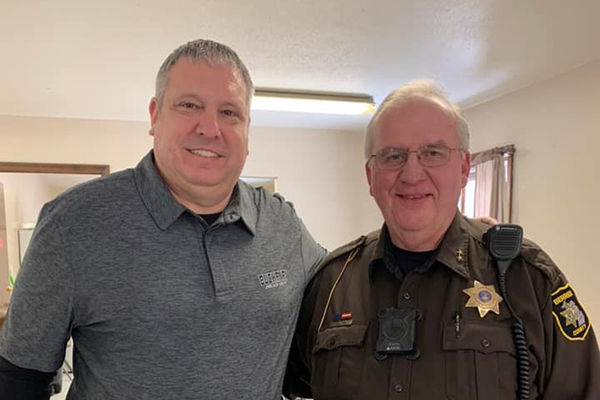 BUCHANAN — After protecting and serving his community for 26 years, a longtime local police officer has decided to retire.

Capron served with the Benton Harbor Police Department before transferring to Buchanan, where he stayed for 26 years. According to Capron, settling in Buchanan was not part of the original plan, which involved becoming a state police officer like his father and grandfather before him. Alas, fate had other plans.

“That’s what got me into law enforcement,” he said. “My grandfather and father were both state troopers. That’s why I chose the path that I did. After being in Buchanan for a year or two, I realized I liked the place and didn’t want to uproot my family and have to move somewhere and go to their 20-week academy when I was already certified. Buchanan was good to me, and I liked the community.”

Having patrolled the streets of Buchanan for more than two decades, Capron enjoys the community he calls home and noted how much it has changed since he started.

“Businesses have come and gone,” he said. The downtown was not very busy when I got here but now just about every building has something in it. The legalization of marijuana has definitely changed a lot of things.”

In addition to the community, Capron said policing has also changed over the course of his career.

“Things are definitely different now than when I started,” he said. “We didn’t have computers in the cars when I started; you had to hand write your reports or type them up on a desktop computer or typewriter. We have software out there now that makes that easier. The laws have changed over the years and the way you have to handle certain situations has changed.”

While Capron is saying goodbye to his Buchanan badge, he is not ready to give up serving and protecting just yet. Monday was Capron’s first day as a member of the New Buffalo Police Department.

“I wasn’t actively searching for another job,” he said. “The opportunity presented itself. After thinking about it, I decided it was the best thing for me and my family.”

For Capron, the opportunity allows him to follow in his grandfather’s footsteps.

“My grandfather retired from the state police when I was 7 years old and then he went on to get another job and retired from that, too,” he said. “It was always something I was interested in doing and I thought it was cool I could retire from two places.”

While Capron will forever appreciate both the Buchanan community and the BPD, he is looking forward to his next adventure.

“[New Buffalo] has different scenery and different people,” he said. “I’ve met a lot of different types of people here in Buchanan and I’m looking forward to meeting new people in New Buffalo.”