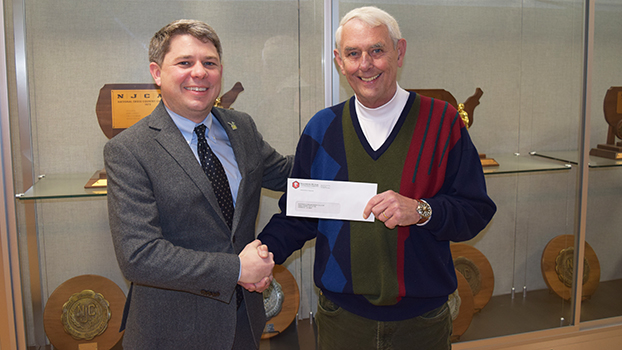 Bruce Laing, chairman, and Dave Moran, vice president of marketing, representing Wolverine Mutual, presented Dr. Joe Odenwald, SMC president, with a check for $10,000 on Jan. 31. This gift, plus an earlier donation from the company, will be used to complete the new 40-foot-long glass case on the west side of the hall, which contains dozens of SMC championship trophies, including the 1973, 1974 and 1975 NJCAA cross country national championship hardware.

The college will install a permanent plaque honoring not only Wolverine Mutual, but also all of the other 44 donors.

Future Wolverine gifts will help fund remodeling of the east side of the Hall to honor SMC’s rich athletics legacy, which includes 10 NJCAA national championships; 58 All-Americans who competed in cross country, volleyball, basketball, baseball and wrestling; and four National Hall of Fame athletes and coaches.

“Of course, we want to be a part of this athletics rebirth,” Laing, who served as SMC’s Head Golf Coach from 1975 through 1979 and led the golf team to a 1978 state championship, said. “SMC has so many exciting things happening right now that will be beneficial for the students and the community. It’s great to see.”

“We very much appreciate Wolverine Mutual Insurance, and especially Bruce and Jim Laing, in not only honoring the legacy of SMC athletics, but supporting our future student-athletes,” Odenwald said. “It’s another example of a local company, literally right across the road from campus, understanding the impact that this athletics revival will have and jumping in to help, and we’re grateful. We think this Hall of Champions will bring alumni back to town to watch games and reconnect with the positive experiences they had here.”

Following the return of nationally-ranked cross country teams to competition last fall, the SMC Board of Trustees in May authorized the return of NJCAA men’s and women’s basketball, women’s volleyball and men’s wrestling for Fall 2022. SMC is also starting a women’s competitive dance team, a collegiate bass-fishing team and a pep band to deepen student engagement.

Wolverine Mutual Insurance was founded in 1917 in Dowagiac, and for over 100 years has provided automobile, home and other personal property protection for generations of customers in Michigan, Indiana and Wisconsin. The company is consistently recognized by independent agents as a top-five carrier for customer service, claim handling, accessibility and consistency.