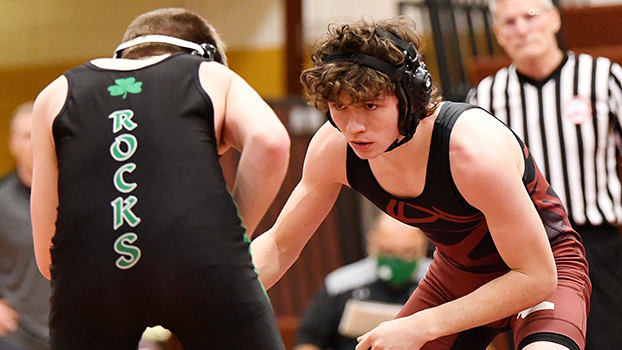 BUCHANAN — Host Buchanan is surging at the right time.

The Bucks, who edged arch rival Brandywine 39-36 Thursday to force a tie between the two teams for the BCS Athletic Conference regular-season wrestling title, earned the outright conference championship by winning the league tournament it hosted Saturday.

The Bucks and Bobcats finished the regular dual meet schedule with 5-1 records, while the Rams were 4-2.

Buchanan won the conference championship by tying for the regular-season title and winning the league tournament. Brandywine and South Haven tied for second place in the final overall standings.

The Bucks won the title by placing 13 wrestlers, including champions Hunter Weinberg at 130 pounds and Walker Barz at 135 pounds. Earning runner-up finishes for Buchanan were Leland Payne at 145 pounds, Jackson Starnes at 160 pounds and Alex Weinberg at 189 pounds.

The Bobcats had five individual champions.

Buchanan and Brandywine will now set their sights on team district titles as both schools host the opening round of the state tournament Thursday.

The championship match is scheduled to begin 10 minutes after the completion of the semifinal matches.

Brandywine received a bye in the Division 4 district opening round after River Valley opted out of the tournament. Eau Claire and Cassopolis will wrestle in the opening round at 5 p.m, and the winner advances to face the Bobcats.

The Beavers finished fourth at the BCS Tournament, while the Rangers finished ninth in the Southwest 10 Conference Tournament Saturday. 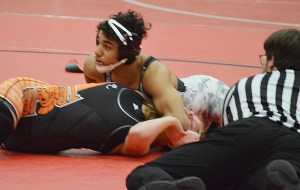 The Trojans, who were undefeated during the dual meet portion of their schedule, finished with 182 points, while Edwardsburg, which was second in the final dual meet standings, finished a distant second with 167 points. The Red Wolves finished third with 130.5 points and the Chieftains fifth with 82 points.

The Eddies finished with eight placers, including individual champions Caden Manfred at 103, Nathan Andrina at 171, Andrew Harris at 215 and Landon Mikel at 285.

Dowagiac placed five wrestlers, including individual champion Jordan Simpson at 119 pounds. Simpson, who recently signed a letter of intent to wrestle at Southwestern Michigan College, won his third Wolverine Conference championship. Simpson did not get a chance to defend his title last season because the league did not host a tournament due to COVID-19. Simpson did earn All-Wolverine Conference honors in 2020-21 based on his regular-season record.

Niles also had one individual champion as Conner Pickens captured the 112-pound championship.

The Vikings’ Sam Rucker finished second at 160, while Dan Gaya was third at 215. Julian Means-Flewellen and Brayden Zimmerman were fourth at 152 and 189, respectively.

Edwardsburg will host the Division 2 District Tournament starting at 5:30 Thursday. The Eddies will face Wolverine Conference foe Sturgis, which did not score a single point at the league tournament Saturday, in the semifinals. The winner advances to face Niles, which received a first-round bye. The championship match is scheduled for 10 minutes after the completion of the semifinals.

The Raiders finished with 183.5 points to easily outdistance runner-up White Pigeon, which finished with 152.5 points. Marcellus finished eighth with 42 points and Cassopolis ninth with 20 points.

The Rangers took just two wrestlers to the tournament, both of whom placed.

Jaren Waldschmidt finished third at 160 pounds and Darnell Rimpson was fourth at 130 pounds.