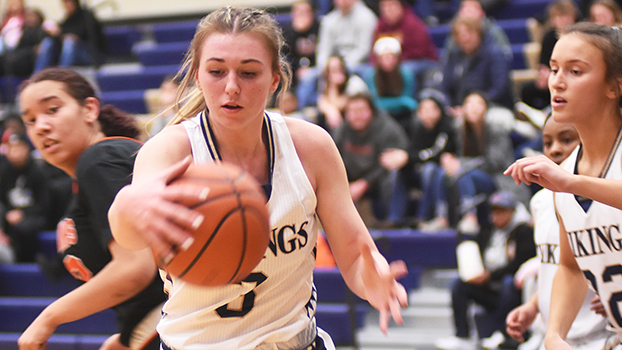 NILES — Playing its best game of the season, host Niles picked up its third victory in its last four games Friday night.

According to Niles Head Coach Jessica Johnson, the Vikings played well at both ends, who saw her team defeat Sturgis 61-20 in a Wolverine Conference South Division girls basketball matchup.

The win improved the Vikings to 6-8 overall and 3-2 in the South Division, good for second place behind undefeated Edwardsburg.

“We had a good start with a lot of great energy,” Johnson said. “I was happy with it.”

While Niles got its regular contributions from seniors Kamryn Patterson and Amara Palmer, the Vikings got a huge lift from sophomore Elly Matlock, who scored a game-high 20 points, grabbed 12 rebounds and had eight steals. Leaving her just two steals shy of a triple-double.

“She really came on strong,” Johnson said. “I knew she always had it. She has just been getting better and better.”

Niles quickly got out of the gate, leading 23-9 after one quarter, which it extended to 38-13 at halftime. Sturgis (7-7, 3-3 Wolverine South) would only score seven points in the second half, all of which came in the third quarter.

Meanwhile, at the other end of the court, the Vikings scored 23 points and forced the start of the running clock in the third quarter.

“We have been preaching that as a team, we needed to come out with energy and to play as a team,” Johnson said. “We need to pick each other up. I think they are finally getting that.”

Palmer finished with17 points, seven steals and five assists, while Patterson added 11 points, all of which came in the first quarter, to go along with eight steals and six assists. Brynn Lake finished with six points. 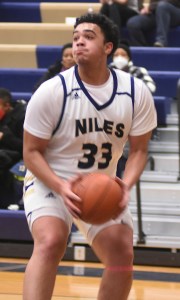 Niles (4-8, 1-3 Wolverine South) trailed the Trojans 7-6 after the opening quarter, but rebounded to grab a 15-12 halftime lead. It was a lead it would not relinquish.

Both teams continued to struggle offensively in the second half. Niles slowly built its advantage — leading 30-25 after three quarters — and finishing the contest with a six-point victory.

The Vikings hit the road for a non-divisional game at Vicksburg Tuesday.