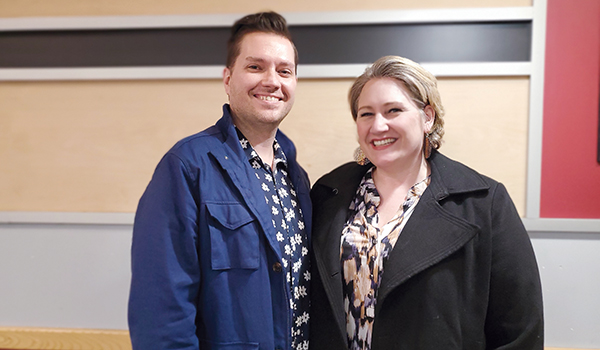 CASSOPOLIS — A new theater is aiming to bring the performing arts to downtown Cassopolis.

Cousins and Niles natives Alicia Savage and David Ferrell are planning to open The Amarok Theatre at 144 S. Broadway St., Cassopolis this summer. The business has a mission to provide musical, cultural and informational programming that celebrates and expresses the diversity of the community. The building will also be home to a coffee shop, Savage Bean Roastery, operated by Kimberly Savage, and a bakery, Sweet Tweets by Jennie, operated by Jennie Todd.

“We want this to be a place where we can switch it up every time we do a production,” Ferrell said. “We want to do workshops, dance shows, classes, literary readings, all kinds of stuff.”

Ferrell is the founder and artistic director at the theater. He holds a bachelor’s degree in business administration and has directed and performed in more than 50 productions over his 20-year career in the arts. Savage is the executive director of Amarok. She has a background in singing, songwriting, acting, dancing, public speaking and musical theater. She holds a degree in human services and management and has played leading roles in many productions.

The two have long been interested in musical theater. Savage was inspired to perform by her mother, Joyce Ferrell-Anglin, while Savage encouraged Ferrell to be involved in his first production at a young age. The two have long dreamt of owning a performing arts venue, and Ferrell founded the theater in 2019, but the COVID-19 pandemic put a halt to plans. Though the pandemic still continues to have an effect on the performance industry, Ferrell and Savage decided they did not want to wait any longer to open their dream venue in downtown Cassopolis.

“We found a building that we both love, so it just made sense,” Savage said of the decision to locate in Cassopolis. “I’m excited to get to know the Cassopolis community through this new venture.”

“Cassopolis didn’t have anything like this, so we saw it as an opportunity,” Ferrell added.

The name Amarok comes from an Inuit legend, in which the Amarok, a mythical creature, provides a boy the strength to defeat three bears. Savage and Ferrell said the name was chosen as they hope the Amarok Theatre can be a safe place for artists and audience members to escape the trials of their everyday lives, which is what the performing arts have always done for them.

“We want to provide a voice for everybody, not just a few,” Savage said. “We are big on diversity and inclusion.”

The Amarok Theatre is currently on course to open its doors this June. While Ferrell and Savage are currently in the process of finalizing their opening season, they have plans to host a summer concert series, two plays, a variety show and community events. Eventually, the Amarok plans to host four theatrical productions each season in addition to concerts, lectures, poetry and literary readings, classes, community events and workshops.