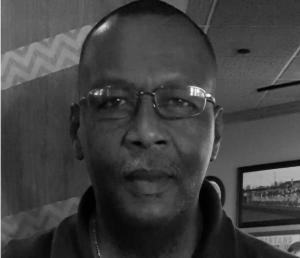 Edward James Taylor, 57, of Battle Creek, Michigan, went home to be with the Lord on Jan. 31, 2022, with his wife by his side. He was born March 11, 1964, in Cleveland, Ohio, the son of Hortense (Holloway) and late Steve Taylor. Edward was raised in Niles, Michigan and graduated from Niles High School, where he played basketball and baseball. He attended Olivet College in Albion, Michigan where he also played Collegiate Basketball and earned a Degree in Engineering.

Edward enlisted in the U. S. Army in 1984 as a combat engineer and M-16 specialist. While stationed in Germany, a unfortunate event left Edward disabled, but he made the best of every day. He joined the Disabled Veterans of America (DAV), and volunteered at the VA while still serving his country. Edward enjoyed all sports, traveling, and most of all spending time with his mother, family and friends.

As a child, Edward was an avid member of Franklin AME Church in Niles, and often visited the Church whenever going back to his home town. Upon arriving in Battle Creek, Edward became a member of Victory Life Church under the Pastoral Leadership of James Sunnock, until Edward’s untimely passing.

Edward met and married the “Love of His Life” for 10 Blessed years and is survived by his wife, Julia (Hawkins) Taylor, of Battle Creek. Edward is also survived by his sister, Angela Dixon, of Missouri; brother, Gregory (Anna) Taylor, of Missouri; brothers-in-law, Maurice Pointer and Bruce Hawkins, of Battle Creek; and two aunts, Viola Mason of NC, and Susie Sturgis of IL. Also surviving are five nephews, Lee (Kambria) Dixon Jr., Dominique (Katie) Dixon, Allen Taylor, Anthony Hawkins, and Mark (Rananah) Pointer; six nieces, Deyja Taylor, Brandi Taylor, Depree Hawkins, Julia Hawkins, Adrianne Pointer, and Debrea Micklatcher, all of whom Edward love dearly and every time he saw them, he would be overjoyed. Edward also leaves behind a special friend and matchmaker, Janice McNichols, who introduced Edward to Julia in 2009; as well as a host of great-nephews, great-nieces, and cousins, whom he cherished greatly. He was preceded in death by his father.

Edward’s Going Home celebration will be held 11:30 a.m., Feb. 11, 2022, at Farley Estes Dowdle Funeral Home & Cremation Care, 105 Capital Avenue, NE, Battle Creek. The family will receive friends from 10:30 a.m. until the time of services at 11:30 a.m., Friday. The service will be Live-Streamed and may be viewed at vimeo.com/673316832. Interment with full military honors will follow at Fort Custer National Cemetery in Augusta, Michigan. Donations can be made to the DAV, Franklin AME Church in Niles, MI., and Victory Life Church Battle Creek, MI. Personal messages for the family and favorite memories of Edward may be placed at farleyestesdowdle.com.