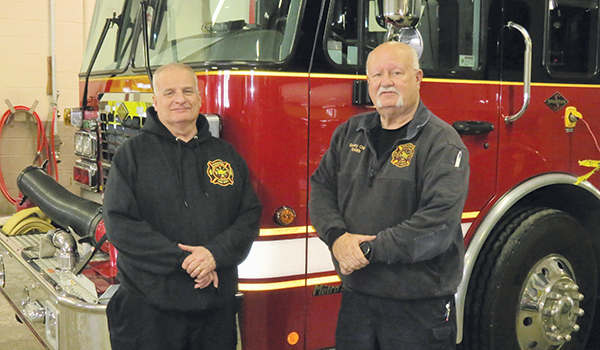 DOWAGIAC — When Robert ‘Smitty’ Smith was just getting started with the Dowagiac Fire Department in 1990, he was commuting from Three Rivers. Before too long, fellow firefighter Robert Nelson offered to let him live at his place until Smith found an apartment of his own.

Their friendship grew through the decades, with Smith eventually becoming deputy fire chief, and Nelson serving as a lieutenant with the department. Now, with more than 50 years of combined firefighting experience in Dowagiac, the pair retired together on Friday, Jan. 28.

“I don’t want to say we’ve always been doing this together, but we’ve been partners and friends ever since I moved to town,” Smith said. “[Nelson] joked with me maybe a year ago, he says, ‘Whenever you’re ready to retire, I’m going to retire.’ I turned in my retirement notice, and darn if he didn’t give me his letter then next day.”

Smith got his start in 1982 at an EMT class in Three Rivers, and became an on-call firefighter in 1983 before making the move to Dowagiac in 1990. Nelson, a Dowagiac graduate, started firefighting in 1986.

“We’ve got some EMS stories,” said Nelson, who estimated he has been a full-time firefighter for 21 of his 26 years of service. “That was a big part of the Dowagiac Fire Department back then.”

The two of them have worked together off and on for more than 30 years, with both men taking some time off during their firefighting careers. Nelson spent more than six years building retail stores on the road, while Smith worked at the Cook Nuclear Plant for 15 years.

However, after a few years of time away from firefighting, Smith returned as an on-call firefighter for Wayne Township during that time. He was also was the chief of the Indian Lake Fire Department from 2005-07 and later adding some on-call duties with Dowagiac.

While both Nelson and Smith said the job was rewarding, the firefighter lifestyle takes its toll, and both decided they were ready to retire.

“Working a shift, you’re here 24 hours every third night of your life,” Nelson said. “My wife and I, we’re still in our upper 50s. We can still take some trips. … Plus, I have a knee that needs replacing and things like that. It’s just time.”

Smith, who has been in the fire service for 40 years, agreed.

“Firefighting is a young man’s game,” Smith said. “You need to be in great shape, great health, and the emotional stability has to be there to do this kind of a job. You’re showing up on somebody else’s worst day, whether they’ve got a fire or some bad accident or whatever’s happening in their lives that you’ve been called to help with. I’m not saying I’m lacking a lot of those things, but I’m not a young man anymore.”

Nelson and Smith have both been working to ensure a smooth transition within the department, will remain a part of the team to help mentor the other firefighters. Both also plan to continue to be involved with the community.

“I think it gives me an opportunity – both of us, really – to be more involved with the community,” Nelson said. “I was born and raised blocks from here. This is home.”

Smith plans to continue to help out with shifts at the fire department, as well as continue his part-time job with the Western Michigan University School of Pathology, where he works for the medical examiner’s office. He is also the president of the Cass County Firemen’s Association but plans to scale down his role.

“Some of these things I used to do because I liked doing them,” Smith said. “I haven’t stopped liking doing them, I just … want to do some other things. My wife and I own a camper, and we like to go camping, and this job keeps you around. You can’t be very available when you’re a hundred miles away.”

Smith said he and his wife have already planned a trip to Alaska, and also took to Facebook to thank the community.

“I’m grateful to all who have shared this adventure with me,” he said. “Especially my wife, who understood the entire time that sometimes this job just means I won’t be home for a while. I am also thankful that there were no serious firefighter injuries during these years. I’d like to think that together we helped many people who were having their worst day. It was a career I have truly enjoyed being a part of but could not have done it without a great team.”

Dowagiac Director of Public Safety Steve Grinnewald said he is grateful for the decades of dedicated service Nelson and Smith have given to the city and its residents.

“I think of all of the late nights, weekends, holidays, times missed with family and friends to answer the call for service when it went out in Dowagiac over the years – all of the time and effort they put in to help shape this department what it is today,” Grinnewald said. “They have been a huge part of this department over the last 32 years and have been here through the good and bad. … Fortunately, they both are going to be around to tap that knowledge and experience when needed.  We certainly thank both of them for their service to Dowagiac and the Dowagiac Fire Department and wish them well as they enter this new phase of their lives.”

Tony Stewart has been promoted to the position of deputy chief, while Robert Jones and Mike Luna have filled other full-time positions.