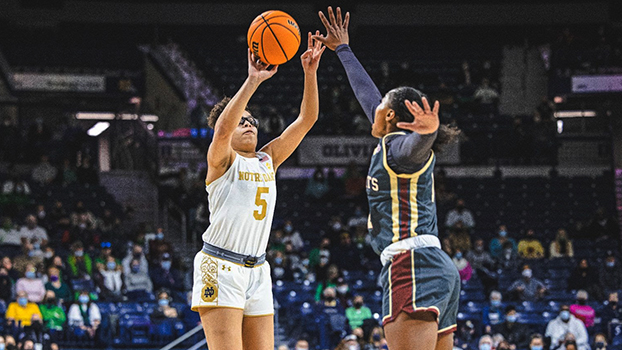 It was a superb day for Notre Dame freshman point guard Olivia Miles, who poured in a career-high 30 points. The New Jersey native shot 12-of-19 from the field, including a career best 4-for-8 from three. She also dished out six assists and grabbed four boards.

Maya Dodson’s career-high streak of double-digit scoring games was extended with 12 points today. She also collected her third double-double during that stretch as well with 10 boards, and matched her career-high with six blocks.

Lastly, Sonia Citron posted her fifth straight game in double figures with 14 points on 5-of-8 shooting from the floor.

The Irish offense garnered some momentum in the second, firing off a 15-2 scoring run from 8:17-3:45. Five different players registered points in the scoring run with Dodson leading the way with six points. Miles then scored the final six points for the Irish in the half, as ND enjoyed a 35-27 lead at the break.

Miles led at the halfway point with 14 points while Dodson was already eyeing a double-double with eight points and eight rebounds.

Miles took over in the third, where she tallied 10 points, going 2-for-3 from three-point range. The period was highlighted by a 13-2 scoring spurt in which Miles and Prohaska combined for nine points. Later, Citron capped the period by scoring with two seconds on the clock to push the Irish lead to 59-40 heading into the fourth.

By the end of the third, Miles had tied her season high of 24 points, while Dodson had her double-double with 12 points and 10 boards.

Furthermore, the third quarter continues to be Notre Dame’s best. They are averaging 22 points in the third this season and outscored BC today in the third, 24-13.

Citron and Miles combined for an 8-0 run early on the fourth, building Notre Dame’s lead to its largest of the game, up 26. From there on, the Irish cruised to the home win.

For what it’s worth, Miles did have a three-point shot with 3:01 remaining, which if it had fallen, would have set the Notre Dame freshman single-game scoring record.

The Fighting Irish look to #ProtectPurcell Tuesday, when the third-ranked NC State Wolfpack come to town. Tip is set for 7 p.m. and will be streamed live on ACCNX.