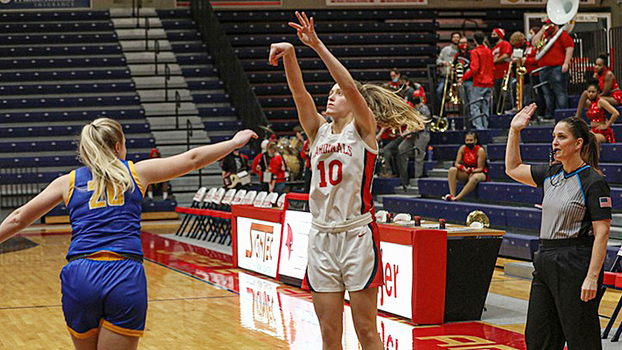 With Saginaw Valley (12-4, 7-2 Great Lakes Intercollegiate Athletic Conference) 21-3 after the opening quarter, Zarycki scored four points in the first quarter and six points in the second quarter as the Cardinals increased their lead to 39-11 by halftime.

Zarycki scored nine more points in the third quarter and six in the final quarter to reach the milestone.

“I am so incredibly proud of Z,” said Saginaw Valley Coach Jenny Pruett, “She has worked really hard and is so incredibly driven. She loves her teammates and loves being a part of this group’s success. By playing her role day in and day out, we are successful as a team.”

Zarycki had a well-rounded game as he also grabbed seven rebounds, dished out five assists and had three steals.

The Cardinals will head to Detroit Thursday to take on Wayne State University in another GLIAC contest.