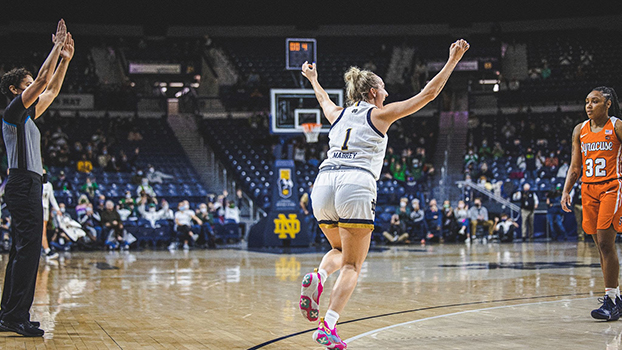 The Fighting Irish (15-4, 6-2) had six in double figures Thursday, highlighted by double-doubles from its two freshmen, Olivia Miles and Sonia Citron.

Miles got ever so close to that second triple-double, recording 17 points, 10 rebounds and nine assists. Meanwhile, Citron notched a career-high 12 boards to go with her 13 points — 10 of which came in the fourth quarter.

For the fourth time over the last five games, Sam Brunelle registered double-digit points, as the junior continued her hot streak with 15 on Thursday. She also reeled in a season-high six rebounds.

Maya Dodson’s career-high streak in double figures rolled on with 13 points, her seventh straight. Finally, Dara Mabrey and Maddy Westbeld rounded out the double-digit scorers with 12 and 10 points, respectively.

The first quarter featured six lead changes and four ties in a back-and-forth affair. Citron, Miles and Mabrey all hit threes in the opening period, and Dodson recorded a stretch of a solo 6-0 scoring run. After 10 minutes, Syracuse (8-10, 1-7) led Notre Dame by the slim margin of 21-19.

Later, down 25-23 just under the six-minute mark, the Irish fired off a 10-0 scoring run lasting a little more than three minutes. However, the Orange countered with a 6-0 run over the next 90 seconds, but the Irish garnered a little momentum heading into the half with back-to-back three-pointers from Abby Prohaska and Mabrey.

The Irish were 8-for-18 from beyond the arc in the first half, as five different players had tallied at least one. The Notre Dame defense limited Syracuse to 5-of-19 shooting in the second quarter, which helped build a 39-31 lead at the midway point. Yet, the Orange were able to keep it close by taking advantage of 13 ND turnovers, which they converted into over half their points (17 to be exact).

The third quarter was just as evenly matched with the Orange edging the Irish in points 17-14 to cut the lead to 53-48. Brunelle notched six points in the period to lead Notre Dame. By the end of the third, Miles was on triple-double watch with 12 points, seven rebounds and eight assists.

Finally cutting down on its turnovers in the fourth, Notre Dame exploded for 30 points to pull away for the 83-62 victory. Citron led the way with 10 points on 4-of-5 shooting, along with four rebounds.

The Fighting Irish continues their big four-game homestand with a revenge matchup against Boston College on Sunday. Tipoff is set for 2 p.m. on the ACC Network.